Review of Mission Impossible: Ghost Protocol
Rarely is the fourth movie in a series the best. Indiana Jones has long been the lone exception. 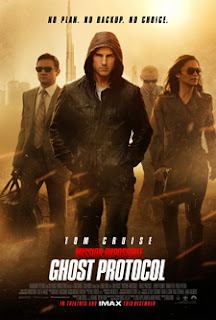 Until now.
It’s not like I was waiting for another Mission Impossible sequel. The leaping motorcycle hug was enough to make me forget that movie and the next one, despite Phil Sey-Hoff (as the kids call him). But an unusually high Tomatometer rating combined with my sociopathic need to finish all movie series that I start forced MI4 onto my Netflix queue. And with pleasantly unexpected results.
First, you have to accept that there’s some guy who wants to end the world in nuclear war and people willing to help him. Now that you’ve choked down that huge horse pill, enjoy the first movie in the series to sprinkle a little bit of humor in with the innovative action scenes and homages to a 1960s TV series I’ve never seen.
The movie is not without its inconsistencies. In one scene, Sawyer from Lost has a computer in his eye that gives him the identity of everyone he looks at. Next scene: Tom Cruise and the British guy from Shaun of the Dead break into the Kremlin with an iPad. A fucking iPad. Same one I have. But they of course have the International Espionage app. I have Angry Birds.
In another scene, Tom Cruise is running straight down (down) the tallest building in the world. The outside of it. Next scene: Jeremy Renner is afraid to make a 25-foot jump.
Then the movie ends. The rogue team saves the world from a location somewhere in San Francisco. Next scene: The gang is in Seattle for some reason, laughing and reminiscing about how wacky the past couple days were. This scene was a misogynistic comment away from a beer commercial.
Despite all my nonsense, the film is a good romp and exceptionally clever. Once you get over that nuclear holocaust thing. 9 bugs (out of 10)