Review of Hunger Games
OK, teen book-reading groupies, you may want to get your big girl helmets on for this. You can use the same one from the Phantom Menace review. Nerds are sensitive too. 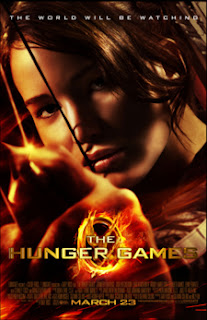 First off, I did not read the book. I’m assuming the movie is both better if I’ve read the book while also not being as good as the book. Because that’s what EVERYBODY says when a book is made into a movie. Both of these statements are implied concurrently with the phrase “Well, you have to read the book” upon hearing that this isn’t my new favorite movie. But see, reading the book is a lot of extra work that you’re asking me to do and I don’t think it’s fair to ask that kind of homework of your audience. That’s why I go to the damn movies in the first place.
Despite the aforementioned fanboy canned response, I don’t believe the filmmakers are trying to make a movie that requires you to first read a book. So I’m judging this on its merit as a movie alone. Maybe that will make some of you feel better somehow.
I actually really enjoyed it. (But I wouldn’t go unbuckling that chin strap just yet) I bought into the entire post-apocalyptic teenage death games as they were explained. Hell, we still sacrifice virgins in certain parts of West Virginia. I even enjoyed Katness as the reluctant hero. Unfortunately, the movie couldn’t quite figure out what it wanted to do with its reluctant hero.
Every time they tried to paint Katness as the underdog nonconformist, Woody Harrelson would tell her to smile and twirl around for the crowd or to make an impression or to flirt with the boy. He was telling her to do things that the movie didn’t want her to want to do on her own, but it knew would still appeal to the 13-25 year-old female demographic. This viewer was not fooled. And then the movie decided to make her the pre-game favorite thus completely shattering the underdog motif. What the hell are you trying to do, movie?
Then the game officials couldn’t decide whether or not they wanted her to win or to make out with a boy or die. They rewrote the rules to help foster a triumphant love story and then created four killer dogs out of thin air to try to kill her. And of course every movie since Twilight that involves a teenage girl needs to have multiple love interests which is a disturbing trend and a conversation for another time.
Also, I expected to be moved by this movie and I was not, likely due mostly to my inability to connect with the main character. I consider her character inconsistencies a directorial mistake, however I suppose it’s possible I really have no idea what it’s like to be a teenage girl anymore. The exception to this came about 90 minutes into the movie when I finally saw the heart that I expected the entire film. Unfortunately that was but only one scene.
The movie was entertaining but riddled with character inconsistencies which eventually delivered a convoluted message that the movie itself doesn’t quite seem to have figured out. 6 bugs (out of 10)

1 thought on “Review of Hunger Games”