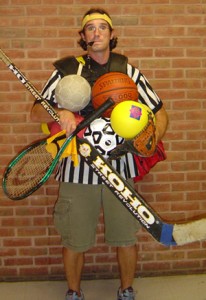 Dustin Fisher is an amateur comedian, storyteller, aspiring writer and stay-at-home father, which are all different ways of saying “unemployed.” He has a college degree in film which he has used on occasion to sound pretentious about movies, and is currently pursuing an MFA in Creative Writing from the University of Baltimore, where he worked in the Rec Sports department as the Professor of Fun from 2008-2012. He also, by virtue of leading off with his full name, has forced himself into writing in the third person for the rest of this page, as if he was important enough to have someone else write this about him. This is not an uncommon practice in websites.

Dustin is a regular performer in storytelling venues for the SpeakeasyDC, Fan-Freakin-Tastic and Better Said Than Done. He has also been spotted performing standup at Magooby’s, Taglines, Drink Til We’re Funny, Kaleidoscope Comedy and The Lyric. He began writing rather by accident with a “daily e-mail humor column” back on March 3, 1995 which very awkwardly transitioned to a website sometime around 2006, well after it was popular. He is currently a monthly contributor to the SpeakeasyDC blog and still writes his own blog for the two people that follow him for some reason.

In Summer 2010, Dustin and three of his friends (Molly Kelly, Jennifer Moore and Kevin Boggs) produced a four-person storytelling show called Logic, Luck and Love for the Capital Fringe Festival. After receiving a five-star review and the distinction of the title “Pick of the Fringe,” they performed the show at various venues over the course of another year, including Atlas Theater, the University of Baltimore, and the 2011 Capital Fringe Festival. Their run sadly came to an end when Molly decided to leave the rolling fields of D.C. in favor of the hustle and bustle world of San Fran, but thankfully not before winning a Fabby Award for storytelling excellence.

Dustin currently lives in New Carrollton with his wife, Jennifer, his daughter, Mabel, his son, Morris, and one too many cats.