Review of Being Flynn 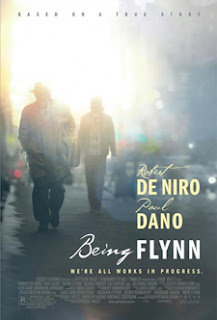 I went into this movie with strange expectations. The movie is based on a memoir (point 1) by a guy who spoke at UB last semester (point 2) called Another Bullshit Night in Suck City (points 3, 4 and 5). So I really wanted this movie to be good. I also thought it would be cool to finally have a movie that I watched before I read the book. So I can read it and say “this isn’t as good as the movie.” Of note is that I’ve only ever seen one movie after reading the book. Drum roll… Angels & Demons. Unless we’re counting Dr. Seuss books, in which case I’m up to 3.
Being Flynn is basically an airplane that drives really fast around the tarmac for a couple hours but never actually goes anywhere. I kept waiting for something to happen and kept feeling the engines gets revved up and put my tray table up and grabbed hold of my drink. And then we’d slow back down again.
Paul Dano finds himself working at a homeless shelter where the fatality rate is 2 in 3. “We catch them on the way down” was perhaps the best line of the movie. I hope it’s in the book. DeNiro (Robert) plays his father who finds himself there as a patron. Not sure patron is the right word. Moving on. The two hadn’t seen each other for 17ish years until about a month prior to the chance meeting at the homeless shelter. The pre-meeting really dampened the impact of the actual meeting. And you can’t really root for either character because they both suck. Dano actually starts taking drugs and DeNiro is an arrogant ass. There’s some reconciliation, as you might imagine, but it was well after I stopped caring for either of these guys. I hope the book is better. 2 bugs (out of 10)