Review of The Girl with the Dragon Tattoo
Dear everybody who makes a book into a movie, Stop trying to include the entire book in the movie. Thanks, Dustin. 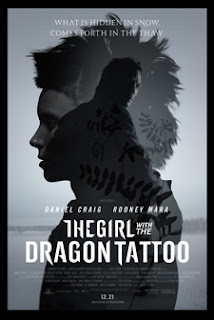 Here’s a quick list of movies allowed to be over two and a half hours – 2001: A Space Odyssey, the Lord of the Rings Trilogy, two of the eight Harry Potters and any movie about World War II or time travel in a Delorean. That’s it. Maybe The Godfather. But not a remake of a movie made two years ago. You’re not Spielberg yet, Fincher.
This movie had all the sex scenes David Fincher wishes he could have put in Fight Club. I’m pretty sure certain porn sites would be shut down for including content that was in this movie. How the hell was this only rated R? That’s the same rating as Horrible Bosses and The Birdcage.
All this said, it was a very entertaining movie. It was a story about a tech-savvy sociopath who blackmails a rapist social worker and helps James Bond find a killer of women. The story was interesting enough, albeit not extremely original. Of course, a remake of a movie that came out two years ago based on a book that came out the previous year has an uphill climb in the originality department.
The real problem with the movie came after they solved the murder. There was the rising action, the big fight scene and then the reveal. The story we cared about was over. Fin. But only there was no fin. There was a fourth act. More character development after the crime was solved. Hmm. If I was in a movie theater, my jacket would already be on and my pants would be zipped back up. But the movie refused to end. The Rooney Mara/Daniel Craig storyline could have been more efficiently managed throughout the course of the film so it didn’t have to be crammed into the last 15 minutes almost as its own separate movie. Or cut it out if you can’t figure out how to fit it in. They blew up the island in Jurassic Park and didn’t even put it in the movie because it didn’t fit with the story. There’s some guts. But like I said before, he ain’t Spielberg yet. 6 bugs (out of 10)