The Hierarchy of Dorkdom: The 7th Day of Giftmas 2009

So I feel I need to make a small addendum to my recent post about fantasy football. See, I started playing Magic the 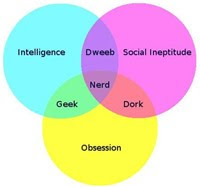 Gathering in college. I understand that some people thought it was dorky and I was willing to accept that. After all, I also played football and talked to girls. Of course I did wear a pink hat and didn’t drink. I can understand why I confused a lot of people.

So anyway, I played Magic in college. My friends who played Magic also played Dungeons & Dragons, known in and out of the dork world as D&D. I was willing to sacrifice the social status that I would lose playing Magic because I liked it. I did not have the same passion for the much dorkier D&D. After all, I also played football and talked to girls and I could ill afford the D&D hit to Social Dustin status. Let’s just forget for the moment about that pink hat thing again.

So I had a conversation with my old roommate, John, about how I met somebody who did this live role playing thing. Instantly, he and all of his entire campaign of fictitious elves and wizards laughed a loud chuckle and told me that LARPers, or Live Action Role Players, were dorks. It was amusing to me to hear someone I considered a dork calling another group of people dorks. And I was telling this to a friend of mine who I play fantasy football with, who started laughing at this Magic-playing dork talking about these other dorks. The argument that Magic is a strategy game and in no way do I ever pretend to be a fire-breathing goblin was lost on him. And I’m sure somewhere, there’s a poker player laughing at that dork. And this is when I realized there aren’t just dorks and cool people. There are levels to dorkdom and a hierarchy to which we perceive each other as dorks based on our gaming preferences (the fact that I even used the word “gaming” bumps me up to a 3 on a dork scale from 1-10).

So there is a dork hierarchy and at the top of this hierarchy, we have professional lumberjacks and Bear Grylls. And at the bottom, we have Furries. For those of you that don’t know – first of all, congratulations. That makes you that much cooler. But Furries are people who dress up like animals and go into a park at night and all have sex with each other. I know what you’re thinking. Dorks.

So provided that you don’t go into the park at night dressed like Fozzy the Bear looking to do it prairie dog style and you also don’t skydive onto glaciers in your boxers, you likely fall somewhere between 1 and 9 on the dork chart. Where exactly that is likely is exactly where you think it is. Plus 2 or 3. And maybe one day, I’ll make that chart. But that would add another level of dorkiness I can ill afford, as I’m currently planning a date to play Munchkin with a couple 30-year-old men.