I’m not a big fan of Drew Carey, but I’m not going to leave my cat unspayed just to spite him. So 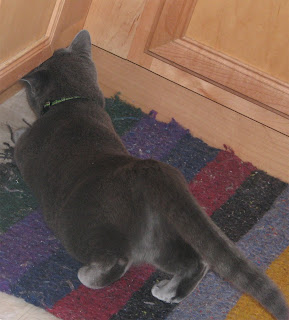 I scheduled Poe’s little kitty surgery for this Wednesday. Unfortunately, due to a poor miscalculation based on data I just kinda made up, my cat went into heat a month before I figured she would. So now I have a poor horny kitty struggling through her transformation into adolescence as I type. And if you’ve never seen a cat in heat, it’s unbearable both for her and her owners. It’s like she’s on ecstasy. She rolls around on the rug and the bathmat and rubs her head on everything she walks by – the table leg, the TV stand, the sharp corner of a bike pedal. Everything just feels sooooo gooood. And she walks around sticking her ass up in the air looking around for boy kitties to come up behind her. She’s scratching at our cabinets looking for them too. And she meows all the time, calling out to these boy kitties to come beat down the door and satisfy her newly discovered womanly needs.

The last cat I had in Ohio was in a really bad way, as they say. Like a life-sentence-with-no-conjugal-visits bad way. She was to the point where if she didn’t get her kitty surgery soon, she was going to die. Not because of that, but because Seth was going to kill her. But really, it was incredibly annoying. It was to the point where I was about to take care of it myself just to shut her up. Kill two birds with one stone if you know what I’m sayin. You don’t have to tell me. I know how wrong that is. But really, I was thinking about going out to find a boy kitty for her, but I’m not that generous of a wing man. If anybody was getting pussy in that house, it was going to be me. Relax, that one wasn’t as bad.

So I dropped Poe off at the Kitty Hospital today and I am picking her up tomorrow. And I caught a stroke of luck. On the way there, Poe was stuck in the kitty carrier. She hates the kitty carrier. After about 20 minutes of meowing and trying to dig out of the plastic bottom of the carrier, she went to work at the metal gate. Like a crack addict trying to get to her crack. Her claws were flying off her paws like a tree-shredder. That horrifying experience was apparently enough to snap her out of heat. I guess if you were thrown into a cage that you could barely turn around in and thrown in a van for an hour, you’d probably forget how horny you were too. Even after a 20-year jail sentence. So the surgery went fine and I am going to pick her up tomorrow. Looks like I don’t have to have that father/daughter talk after all. Maybe a different one. About how I took out her uterus just when she finally wanted to use it.