If wearing my kitten’s collar as a bracelet to remind me of her while she gets her kitty surgery makes me less of a man, well then I don’t want to be right.

Poe is fine. And I did wear her collar around all day, partly as a reminder, but almost entirely for the sake of telling this 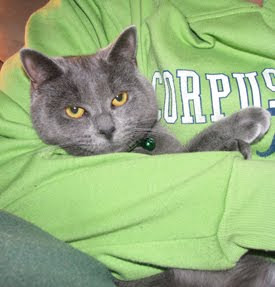 story to people. I’ve given away all my man cards already, no point in hiding my hand. And as I found out when I went to pick her up, she learned how to hiss at no extra charge.

I had this same surgery done with Clementine, my Ohio cat. And the greatest part of it was seeing her wake from her anesthetic-induced haze. She pushed open the rest of the kitty door, wobbled the 7 inches to the kitty box I had placed in front of her, and laid down with her head and one paw in the sand and the rest of her, complete with newly shaved belly, on the rug, tail still in the cage. After fighting with gravity for a few minutes , she then regained her balance and, much like a sorority girl in heels after a couple Water Towers at Brick Street on a Thursday night, fell back the other way. Like the good father I was, I made sure she didn’t hit anything as she fell and managed to take a lot of pictures of the event to eventually show to her boyfriends when she brought them back to the house to watch a movie in her room with the door open. This continued with varying levels of pleasure for me for a couple hours.

However, this time Poe was kept to be monitored overnight, depriving me of the one minor pleasure that came out of shelling out $200 and admitting to myself and the cute girl at the counter, who noticed my collar/bracelet, that I was now a cat owner. That sucked. They wouldn’t even take pictures for me. And when I showed up to pick her up, they said that Poe was “being fussy” and I would have to take her hospital collar off when I got home because they refused to do it. This wasn’t a good sign. The next sign that wasn’t good was the one where the first thing Poe said to me when I got her back, was “HHHHHHHH.” I don’t know how to spell the violent, cobra-esque hiss that came out of her mouth for the first time ever, but that’s how it sounded.

I felt horrible. I’d just taken away her spirit. Not to mention her woman parts. I wanted to assure her that we were going back home to mommy and the fat kitty, but sticking my hands in that cage seemed to have the same effect of that time I managed to take the safeguard off the pencil sharpener back in 5th grade. So I put on her favorite CD, the Bangles. Not even that made her feel better. I told her how sexy the lead singer was, but then I figured she probably didn’t even like girls. Or humans. Or sex. So I put on Air Supply, the most asexual band I had. Same disgruntled meow. I started to realize it had nothing to do with the musical selection. After about 20 minutes of meowing, she started at the cage like the wood-chipper again. At least this was a familiar response. Maybe she’d go back to her old Poeness after all.

And it now appears as though she has. She’s back up on the counter breaking wine glasses and Sweetie is shitting on the rug again. Poe, it’s good to have you back. Kinda.