My life has been fairly blessed over the past five to ten years with one very obvious and distinct exception: my Sisyphean automotive life. 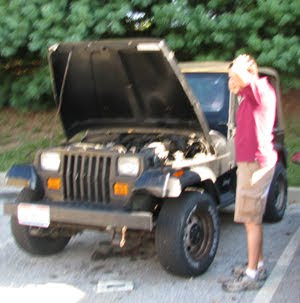 The car gods have been making me roll a Buick up a hill, only to forget to set the emergency brake and watch it roll back down again every night. So maybe they’ve had a change of heart. Or maybe the god of the law of averages finally took over. Either way, I was just given a huge gift in the form of a fender bender last month.

Now I realize a car accident typically doesn’t qualify as a gift. It was the first thing in the morning, I was confused, and it wasn’t even a hot chick that hit me. It was some old guy in an Explorer used the front end of my Civic like a ramp. He was backing into a parking spot with apparently no knowledge that I was just sitting behind him, desperately trying to find my horn. On a 1994 Civic, the horn is located in two small buttons by the thumbs. I spent way too long desperately beating the air bag hoping it would honk, as I was not practiced in activating the stupidly-placed horn strips. By the time I looked down at the gear shift, the Explorer had already explored the hood of my car.

No one was hurt as this all happened at about 2 MPH. In fact, very little damage was actually done. My headlight was scuffed up a bit and the fiberglass was cracked. After a couple days of talking to the other guy’s insurance, an agent came out to inspect it. He left saying simply “We’ll mail you a check next week.” That was it. No mechanics, no lawyers and no bullshit.

I had completely forgot about it until I got the check a couple weeks afterwards. I figured on about a couple hundred bucks. $1004.46! Thank you, State Farm! And there’s no way I’m going to ever need that for the car. A little windex and a green sharpie and you can’t even tell anything happened. I figure that it knocks the resale value down a bit, but that doesn’t matter with me. I’ve run every car I’ve ever owned right into the ground, most of them literally. I’ve owned 5 cars before this one and I haven’t sold any of them. Unless you count scrap heaps. So this is basically free money. I’m going to start to look for people in tall cars and follow them around the city until they need to park. I figure if I can do this once a week, I can make a decent living and finally afford to quit my day job. I don’t know why more people don’t do this.