I’m not a meteorologist. You know this. But what I am is someone with a memory and eyes. 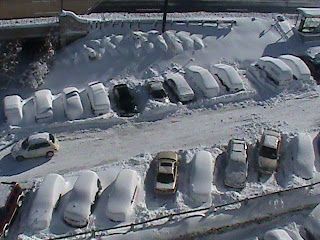 Normally when I hear crap like “record-setting snowfall,” I think about all the cars that seem to all be the best in their class. How the hell is that possible? How many classes are there? Could I just come up with a class and vote for my own car and claim that it was “2010’s best in-class?” I believe that’s the only reasonable explanation. But anyway, I figure that there’s probably some way to skew the statistics with regards to snowfall to make it sound like whatever we are in the midst of is the worst snow ever. It makes us feel like our meaningless life has purpose when we’re a part of history, even if we didn’t really do anything to earn it. But with another 12-20 inches predicted to come tomorrow night, that puts the weekly total at around 50 inches, which is three times the amount we normally get in one whole season. Those are numbers not even car buyers can disagree with.

I’ve seen storms that had a lot of hoopla beforehand only to turn out a small dusting and also storms casually mentioned on the news which debilitated cities for days. Well, they got this one right. I thought everybody was being little pansy babies, shutting down school on Friday and stocking up on water and toilet paper the night before. And why water? Do faucets stop working in the snow? Maybe I’ve just been blessed with decent pipes all these years.

But when the snow started coming and I saw all the salt trucks waiting in the on-deck circle on the side of the highways for the manager to call them to the plate, I realized this wasn’t one of those overhyped dustings. This was the real deal. And I needed cat food. We had enough human food and toilet paper at our place to last us through the weekend, and I was confident our plumbing system would keep delivering. But the cats needed to eat too. They were going to be 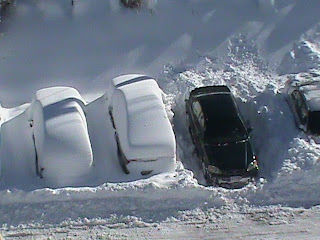 stuck in the same damn storm. And because they never leave the apartment, I was going to have to get their food for them. But I’ll be damned if I’m going to wait in line at Giant for 2 hours just to get cat food. They’ll be eating spaghetti and clementines before that happens. So I figured I’d go way out of my way to the specialty pet store north of Baltimore on my way home from work. This made less sense as the snow was starting to accumulate, mostly because there was a moment of panic when I was about 2 miles away when I had a thought. If high schools, colleges and all government agencies were already closed for the day, what made me think a privately-owned, report-to-no one, independent pet store would still be open? Boy, I really hope I have enough pasta. Well, to make this story super anti-climactic, the store was open. And I got my kitty food. And to subtract even more from the drama, there was still plenty left. Probably enough for another 2 weeks. I think Jen just likes to make stuff up when she calls me to see if I’ll actually do it. Next thing, she’ll be asking me to go get bottled water.