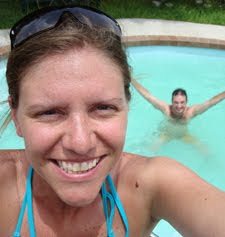 entire NFL season (two if you’re a Redskins fan because November and December don’t count). Well, as of Sunday around 10:30pm, Jen and I became an official couple. This is great news, mostly for her. Because now it means that football season is over and I have to take down all my Eagles blankets and banners and bar stools (no I don’t, but I wish I did). But it also means that we’ve endured the toughest stretch that a relationship can go through. Though being snowed in with each other for 6 straight days is proving to be an unexpectedly grueling challenge.

It didn’t always look like we were going to get here either. We started dating around playoff time last year (early January) but things didn’t get serious until I moved in sometime around draft day (mid-April). I know. I work fast. I warned her then but I don’t think she understood the magnitude of my addiction. There were some hiccups around August when pre-season games started popping up on the TV and fantasy drafts took up a couple weekends. But then the real season started. I don’t know that I saw her for the first four weeks.

See, I’m a Philly fan and before any of you say anything, I did not personally electrocute any dogs – so cut that shit out. Living down here in Redskin territory means that I have to leave the house to watch the game. I was out of the house so many Sundays in a row, Jen thought I had found religion. And that’s not an unfair parallel to draw. I would get dressed and attend every mass every Sunday afternoon at Our Lady of the NFL. We pray to the Holy Roller, the Music City Miracle and the Immaculate Reception, Amen.

And every Sunday, we had the same conversation. “I’m out at the bar… Because the game’s on… No, it’s not on at home… Yes, I know we get 8,000 channels, it’s not on any of them… No I can’t… Because there’s a game on after that and another one after that. I told you all this shit back in April – 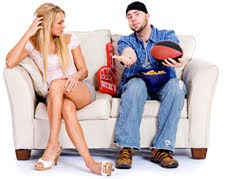 you said you’d be cool!” 17 weeks and I think we had a similar conversation at least 13 times and she was in the Ghaza Strip for 3 weeks.

Then she’d ask why we couldn’t do anything Monday if the Phillies already played. And yes, she called them the Phillies more than once. And guys, why do we have to watch the Monday Night games, even when it’s Cleveland and Oakland? Because we have Zach Miller on our fantasy team and we still need 8 points to win our matchup. That was the part that almost got the locks changed.

But we shot the gauntlet and made it through. So many other couples have failed. Not us. But it wasn’t easy. Getting grilled on politics and religion by her father the day we met was a cakewalk compared to these last 5 months. So congrats to us. Now that we’ve officially made it, she’s saying something about a ring. I assume she was talking about the Superbowl. I know. She’s great.

Oh, and ladies. If you’re one of those gals who thinks that your relationship is fine because your boyfriend doesn’t like football, well then he’s gay. And isn’t this a shitty way to find out.