Sweet Dreams Are Made of Threes

I don’t want to say that I knew that Ray Allen was going to set a record for 3s in an NBA Finals game, but I 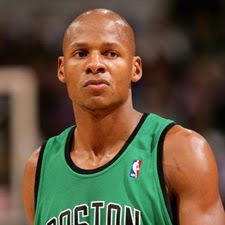 seriously just had a dream about him the night before. We were sitting on my dorm bedroom and I remember him wearing a green jersey, but I don’t know if it was Boston or Seattle. The only thing I really remember is that we talked about how stupid Doc Rivers was for hiding a couple thousand bucks in the ceiling of Staples Center’s visiting locker room.

Apparently, the coach of the Celtics took $100 from every player and hid it in the ceiling of the visitor’s locker room in L.A. back in February and said the only way they would get it back was to make it to the finals. The logistics of this are unfathomable. What if a janitor found it? Or another opposing team? OR! What if the Lakers didn’t get back to the finals? Ever think of that? The Ray Allen from my dream did and he thought it was stupid. So did Dirk Nowitski, who was also in the room downloading porn on my computer. I love dreams.

So yeah, like I said. My dreams told me he was going to set the record. I’m not exactly sure what Megan Fox is going to do now, but it’s going to be pretty huge.