Inside the Head of a Performer II – Part 1

In case you didn’t catch this in the original Inside the Head of a Performer (shameless plug), you are about to enter the head of an amateur storyteller/stand-up comedian/calligraphy artist. These are not the thoughts of Jerry Seinfeld, 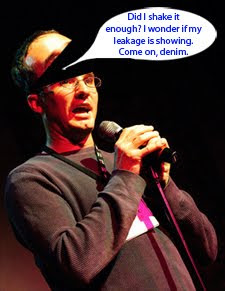 Jerry Lewis or even Jerry’s Subs. I take most of my shots 7 minutes at a time at open mic nights. Par example:

This past Tuesday was another open mic night at the Speakeasy. The theme of the evening was “Ranger Rick: Stories about Animals, blah blah blah.” I already knew what I was doing. I was going to finally get to tell on stage The Cicada Eating Contest story. It is one of the very few moments of triumph in my life. Only after I wrote it, there just wasn’t enough funny in it. In fact, I think it was mostly disgusting and I’d rather send the audience sprinting to the bathroom with laughter. So it was outvoted by the jury of one that lives inside my head. And instead, I wrote a story about my cat. Excitement level=very low; comedy level=mid high to high. Hopefully.

I haven’t missed a Speakeasy open mic night since I started going in May of last year. This Tuesday, however, is the first time I decided to try to drive there from Baltimore. My ulterior motive is that I wanted to stay afterwards to go back to the bar where I met Tony Reali (who hasn’t called or written or texted since) in hopes to run into him and be a guest panelist on Around the Horn or at least say hi in a less awestruck and middle school girlish way and I knew Jenn wouldn’t want to if we had to take the Metro home. Having never driven there and never really driven on 495 anytime before 8pm, I had NO IDEA it was that fucking busy. I started to shit on my way down. I called Stephanie to tell her I’d be late and called 911 to get a police escort. While that didn’t work out so much, traffic lightened up a ton, but not before I gave myself more anxiety on top of the normal performance anxiety I feel (just stage performance anxiety, ladies). At least this time, I felt mostly prepared – as opposed to February, when I strung myself a little thin just after the Sucker for Love Show ended and wrote my story the day before.

So once I got to Towne, the Three Beer Rule was in full effect. That seemed to relax the nerves a bunch in as noticeable a way as I ever remember. Or maybe it’s because I took my boxers off in the car. Either way, I was starting to calm down. I found out that I was 5th in the lineup, just before the break. It has been told to me before that this is a power position. Stephanie said they like to put people there who will lead into the break with a decent story so that nobody leaves during the break. I’ll take that as a compliment, as I’ve been either there or 4th in all 3 of my open mic nights. I also had friends to entertain, as Leigh and Craig continued to prove their awesomeness by surprising me by coming down. Jenn also had 3 coworker friends of hers come with her. I also had two fellow cast members and the two directors from our upcoming Fringe Festival Show – Logic, Luck and Love – show up. Not only was I responsible for my story tonight, but I was representing our show and needed to market before, during and after my performance. Almost decided to increase to the Four Beers and a shot of Jack Rule, but thought better of it.

Once the show started, I had my 5 note cards out in the corner of the bar and was half listening and half studying. The way I had practiced my story, it was originally 9 minutes and I needed to cut it down to 7. I managed to get it down to 7:45 before I added the 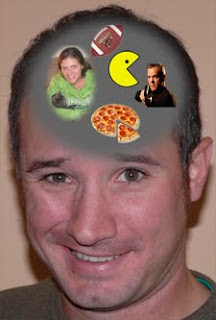 ending I wanted. So I had to trim more and so on until I had done it successfully in 6:45 – or 7:45 depending on my smoothness and bullshitting and such. So I had decisions to make that I was going to have to do on the fly, because I really wanted to make sure to hit my ending bit, which I had just written the night before, but was convinced would be a great closer.

The first act was a guy named Mike who jumped out of the gate with a story of how he never thought he’d be a cat person but now he is. My ears perked up. Holy crap. We were telling the same damn story. And he was doing it first and going to steal all my thunder. And more importantly, my jokes. He danced around a lot of the lines I had and actually had bits in his that I had cut out of mine, but our streams never completely crossed. At least not enough to kill Gozer or a like creature. But he was funny. Which is actually better for me as a performer that goes after him, because he gets the crowd warmed up and on their heels and in the laughing position. But I’m still secretly jealous of him and his laughers and the lines that I didn’t think of to put in my story that he did. But oh well, back to the note cards.

The next three performers were a little bit of a blur. I heard some laughter and thankfully not much about cats in there. I had actually originally misread the lineup and thought I was 6th, forgetting to include Amy, our lovely hostess, deep into her own Three Beer Rule. So when Adam was announced and I knew him to be the guy right before me, I had a decision to make. Was I going to chug this beer, knowing I needed it to complete the Three Beer Rule, or just leave well enough alone, as I already felt that I was crossing the threshold of uncomfortably drunk? Well, it’s not called the Three Beer Recommendation. Bottoms up. “Next coming to our stage…”