Inside the Head of a Performer II – Part 2

If you haven’t read Inside the Head of a Performer II – Part 1, you should probably do that first. Go ahead. I’ll wait.

…I had chugged my third beer about a 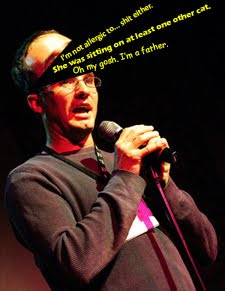 minute before going up onto the stage. I was ready. And once again, I hadn’t planned to do this mic stand bit, but it was already in progress and I remembered from last time, so I decided to close it out. See, at the Speakeasy, the host will adjust the microphone and stand for you so all you have to worry about is telling your story. In stand up, you are expected to do it yourself and often times, will just be handed the microphone. So I decided to play with Amy. She was adjusting it and I pantomimed the universal symbol for “higher” with my hands, while making some exaggerated facial expression to the crowd to include them in on the joke. After an inch or so, I gave her the “lower” symbol. The crowd was already laughing a little. She started to realize she was the butt of a joke, but God love her, she took it in stride (if cursing him under her breath is taking it in stride). I was finally done playing with her and she left the stage. On her way down the three stairs, so that she was the only one who couldn’t see this, I took the microphone out of the stand and placed the stand behind me, smiling at the crowd. They were certainly alive tonight and already on my side before I said a word. If this were stand up, I’d have thanked Amy and the crowd, but storytelling is a little different, and so with respect for the genre, I went into my material.

The first line was “I hate cats.” It went on from there to describe their worthlessness and one person clapped. I didn’t want to lose the crowd that I got on my side from the beginning. I thanked the one person in the crowd clapping. Crowd connection is a cheap way to get crowd members on your side in stand up, and not just the one or more people you connect with. There’s a barrier that you break down and you turn more into a guy talking about a story than a professional. And that atmosphere just makes things more funny because subliminally, they sounds less rehearsed and more real. Some of the crowd laughed, but it was the gesture that was more important than the laughter. I then went on to a joke I almost cut out for the sake of time about how modern psychology would be set back 300 years of Pavlov’s wife was a cat person instead of a dog person. I never thought the crowd wouldn’t get it, I just wasn’t sure if it was worth the time, as it’s just a throwaway line and I was pushing 7 minutes. Well, I’m glad I kept it in. They loved it and it’s likely not a cat joke they’ve heard before. My first 30 seconds was definitely above average and my credos is that I want to get out of the gate strong. If you get them to laugh at your jokes in the beginning, they will start to laugh at your personality later. That’s the theory at least.

And this was great, because I knew the next 30 seconds was probably the strongest bit I had, or at least the one I was most certain about. Jenn introduced me to her 22-pound fat cat. I made fun of her fatness, which turned out to be worded about as efficiently as any joke I had “When I first met Sweetie, I was positive she was sitting on AT LEAST one other cat.” Reaction was about a 7. Then Jenn asks if I was allergic. I said no. Oh, well then you’ll love Sweetie. “No. I’m not allergic to… shit either, but I don’t want a 22-pound lump of it sitting on the couch getting hair all over my clothes.” This was my second best laugh of the night. And I’m still unsure if I stepped on my own joke. The laughter erupted right after the word shit, but I kept going as I needed to finish the sentence. I was tempted to let it resonate, but I thought I’d drive the point home. I’m OK with that decision. A definite 9 to 9.5 of laughter.

The next 4-5 minutes were filled with 4 short stories about Poe’s (new kitten’s) discovery, the cruel trick kittens play on you, the dried Sweetie poop toy and the kitty going into heat. 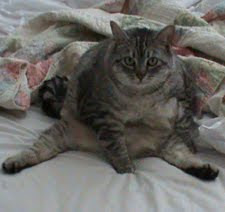 They were met with intermittent laughter about as I thought they would be. The story about the Sweetie poop toy was understandably met with the best reaction, but I wasn’t out of the woods yet. I still had to make sure that I would be able to keep in my new ending. I really needed about 1:30 to pull off this ending without rushing through it to make it both funny and somewhat touching. I was tempted to skip the whole part about her going in heat. There was a contingency plan in place where rather than do the cat’s voice, I would tell a joke about it. This would save me up to 15 seconds. But right before I started to bit about her being in heat, I glanced down to see a clock sitting in front of Stephanie, who was timing the show. I also figured she probably wouldn’t ding me off the stage, but I don’t want to pretend I deserve special treatment. Shit, they dinged Vijai at a livewire. They might throw the bell at me.

Anyway, the clock read 5:00 or somewhere close to that. That was a complete stroke of luck not only to have that much time left over, but also to find out that info when I did. I was able to get into the character of the cat, which didn’t result in as many direct laughs as I’d hoped, but I got to do it and I’m sure those lived with cats in heat will remember that part. And I had about 1:30 to do the ending. The climax came when I get Poe back from the kitty hospital and she had a collar on that said “Poe Fisher.” That’s when I realized that I… was a father. That line was met with some awes and laughs and honestly went over better than I thought. 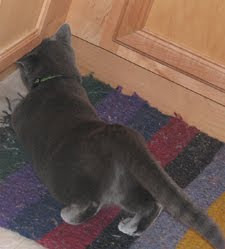 and I will talk to her. She actually talks when either one of us gets near her toy. Not meows, but talks. It’s hard to describe, but I did some dialogue on stage. “Mare ma mare ma mare mare mare.” Oh really? Then what happened? “Mare ma mare mare.” Oh really? So the island was real and the flash sideways was purgatory? That’s interesting. “Mare mare.” I should have probably just stopped there and did my final line because that was the 10 on the laughter scale. I was unsure if a LOST reference would be gotten by this Tuesday crowd, but I figure everybody has a DVR anyway. And it’s only one week a month. But it was perfect and because it was interesting on a few different levels. First of all, it came out of nowhere. Nothing had anything to do with LOST in the entire show. Second, this is the first Speakeasy since the finale and topical stuff shows that you’re not just doing stock material all the time (see the connectivity to the crowd bit in the second paragraph). Third, it’s funny to imagine that the cat had figured out this relatively complex concept. And that’s what I was going for when I wrote it. I thought “What would a cat most likely not understand?” After thinking about several different ideas like Quantum Physics and Economics, I decided it really needed to be a current events issue. BP was on the table for a while, but then the LOST idea snuck in and I absolutely needed to see if it would work. And it did. Much better than I thought. There was some touching wrap-up that could have been cut down to one sentence after that line, but I’m still happy with it.

“Don’t get me wrong, I still hate cats. I just love my daughter.” That was the last line. Stephanie said it would be nice to hear a story that showed the crowd that I wasn’t such an ass, because most of the stories I tell paint me as such and she doesn’t think that I actually am in real life. Which was sadly a touching compliment, to be called not so much of an asshole in person. So anyway, I pulled off a story that not only didn’t make me seem like an ass, but also finally didn’t have any girls in it other than Jenn (which she was happy about) AND killed the crowd. Who knew? When Amy came back up on stage, I thought I’d play with her and mess with the mic stand. I lowered it all the way. This was honestly just meant as a follow-up to the first mic stand bit, which the crowd thought was funny, but may have been seen as a short joke, which I think she actually brought up as I was leaving. Oops.

So that’s the kind of shit that goes through my head when I’m performing on stage. This was a very pleasant experience. They aren’t always. And because I had gone over my material so much, I forgot why it was funny. I hate that. But it’s good to see that I was right when I wrote it the first time.