My father enjoyed to mess with me as a child. And as an adolescent. And as a young adult. And he was good, because 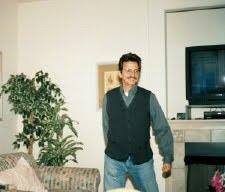 I wasn’t all that stupid. Every time I grew wise to his ways, he’d reach a new level of straight-faced Kool-Aid that I would once again drink. He got a lot of practice at Markley Billiards, where he and his buddies would mess with the unsuspecting newbies. Whenever a new guy would come in and start eyeing up a stick with his left hand, my dad would tell him that the left-handed sticks had a red dot on the bottom. He would then watch as this poor kid would roam the room looking for a red dot that didn’t exist. I’m not exactly sure how that bit ended.

Well, here’s one that he probably didn’t realize would have the staying power that it did and I really hope it comes across in print like it does when I tell it. I was in the passenger seat of the car on my way down to UMBC for freshman orientation, excited and nervous. This would be the longest time I would be away from my dad ever. We talked all the way down. He gave me advice, we said our goodbyes and we laughed a lot. We noticed a sign that said “No Hazmats in tunnel” on the way down. He asked if I had packed any Hazmats. I don’t know. We had no idea what a Hazmat was. We half expected to be stopped at the tunnel and to have some security officer to pull his gun on us and ask us to take the Hazmat out of the car. I now know what they are and how stupid we both were.

But about halfway down, we saw a sign and he just shouted out “Havre De Grace!” But he pronounced Hav-re as 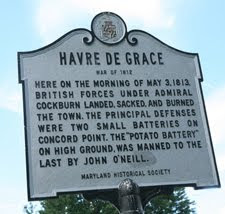 if it rhymed with Ben Stiller’s pronunciation of Fav-re from Something about Mary. And Grace rhymed with Bocce. De was pronounced like day. Now say it altogether to yourself. Havre de Grace (Lava Day Bocce). He just shouted it out loud and when I looked at him like he was full of shit again, he just told me it was Italian. Well, dad was half Italian and a lot more knowledgeable than I about such things. Besides, he had upped his straight man game something fierce. And since this was the first time I had seen it and it seldom came up about an hour south of there, I lived with that pronunciation of it long into my junior year.

Finally, the day came when this happened. I believe I saw a news reporter say something about Harve de Grace and pronounced it so unprofessionally lazy. The way he said it rhymed with the actual pronunciation of Favre with the words Duh Grace after them. Harve de Grace. I was floored at how sloppy this reporter was. Only three syllables, no roll of the tongue, I couldn’t smell marinara sauce in the background when he said it or anything. I brought this up to Barnes, who was in the room with me and about 6 other people. He laughed. No, I’m serious! How can he call himself a journalist?! His laugh reached a different level, likely from pitied approval to an actual real gut laugh. He told me that’s how it was actually pronounced. All this time, they thought I was just being funny when I said it my way and I thought they were just all being lazy when they said it the apparently correct way. I was the inadvertent victim of my father’s long con and in a way, I was voicing his joke to my friends without my knowledge or consent like a puppet unaware he’s a puppet for over two years.

I called my father with a little bit of sarcastic disapproval and told him that it wasn’t pronounced Lava Day Bocce. What? Oh yeah. I had no idea. This is his reconciliation for the lie that made me the fool for two years. What other lies have you been spinning all these years? I still haven’t forgotten about that Santa Claus thing. Still love you though.