I’ve created my own Father’s Day routine since my dad has passed away back in 2005. I listen to The Living Years, watch 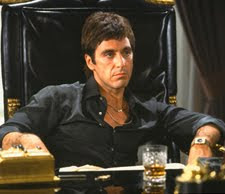 Big Fish and reread The Heartbreak of Breathing, a short story I wrote about his passing. Yes, I cry. It’s OK. And it’s actually not that uncommon. Lots of things make me cry, including – but not limited to – most Monk episodes, Ron Artest’s psychiatrist-thanking speech, and watching Last Comic Standing episodes. But I consciously make an effort to remember my dad and try to recall things about him that I haven’t thought about in a while. As you may know, I credit him for my sense of humor. Thankfully, I credit mom for my looks [bazinga]. Anyway, I’ve already chronicled in this website many of the things I remember very vividly about my father (note the Father’s Day section on the top right). Well each day this week, I’ll chronicle another memory of him that I haven’t shared with the greater public (Tom – and apparently Nichol. Hi and thanks for reading) on this website yet.

You Snooze You Lose

I believe I can link the fall of the American dollar and the economic depression of the 80s to the invention of the snooze alarm. Instantly, the entire country stopped getting the rest they needed AND no longer showed up to work or the school bus stop on time. It was a downward spiral of unproductivity we knew we were in and yet could not escape, like a spider being flushed down a low to middle class toilet. I was one such victim of the fad. And as our house was quite small, so was my family. The ear-splitting siren would sound and I’d usually be able to get to it before the third deafening beep. Whether I would stay awake or fall back asleep was dictated by a randomly generated Schrodinger-type experiment in my head.

My mother would come in to make sure I was getting ready for school because she was not only a good mother, but also because she didn’t want me to have to ride my bike to school, thus making her feel guilty. But she was too sweet to get me up permanently. And I was a good sleeper. She would come in after about 2 or 3 snoozes. If I ever made it to round 4, that’s when dad would show up. Not as sweet and always a lot angry that he was awoken 4 or 5 times in a row in the morning at seemingly random 9 minute increments. Like Tony Montana-type anger. So I rarely let it get that far.

But one such morning, I was apparently incredibly tired. As stated before, this alarm was so terrifyingly loud, I have nightmares about it still. BEEP! BEEP! BEEP! Well on this particular morning, I made it to the 4th snooze. It was Scarface time. But this time, I was completely asleep. My head was inches from this Three Mile Island alarm and people in neighboring counties were putting pillows over their heads. My father came storming in, as the alarm was likely going off for possibly 50 mind-melting beeps in a row. You wanna fuck with me? Okay. You wanna play rough? Okay. Say hello to my little friend!

I was awoken with mixed feelings of confusion, guilt and a terror I wouldn’t feel again until I went skydiv 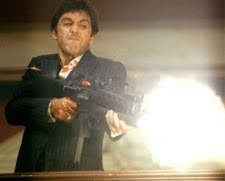 ing, which hasn’t even happened yet. Realizing the alarm was going off and I had miraculously slept through it, I saw a look of frustrated confusion on Tony’s face. I couldn’t tell you if I thought he expected me to be awake and jamming to the beeps or downstairs and unaware of the alarm. I prefer to think the latter, since he seemed perplexed that I was asleep in the room, which means that his tirade was meant specifically for that alarm clock. It would be a while before I would sleep passed the alarm again, mostly because I couldn’t fall asleep in that house for three months. To this day, when I hear that beep from an alarm clock, part of me expects Tony to come bursting through whatever hotel or guest room door I’m in. I never fucked anybody over in my life didn’t have it coming to them. You got that? All I have in this world is my balls and my word and I don’t break them for no one. Do you understand? Miss you, dad.

2 thoughts on “Dad Memories: You Snooze You Lose”