Three of a Kind

Sorry about my unscheduled delay in Father’s Week, but I was called up that Thursday to do a comedy show on Saturday and I needed to 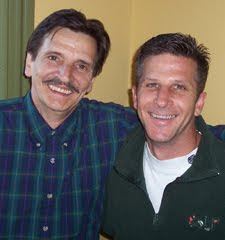 dedicate a little time to that set. And I really do have a full-time job that takes up about 25 hours a week if you don’t count the time on facebook and twitter and hulu (OK, 15). But I did want to get one more story in about my father before I spend the next three weeks concentrating solely on my big show (and smaller show), which I’ll be sure to tell you about until you’re sick of it too.

This is one of my favorite stories and I’m not even in it. And as narcissistic as I am, that means it must be a good one. Toward the end of my dad’s days, he started telling me a little bit more about the part of his life I wasn’t privy to before. As a current adult, I now know there are many things I would prefer my children not know about me until they’re old enough. Not bad things, just stuff like girl-chasing, pot-smoking and genital-exposing type of activities. Which means you’ll all be warned 9 months before this website will be shut down. But my dad and I began to speak more candidly about his past in the summer of 2005. And the following is his account of a night in Atlantic City with John and Mark, two of his brothers.

It really helps if you know Mark and John, but you don’t have to. Picture two guys a lot like my dad, one younger than the other. If you don’t know my dad – try picturing a mix between your dad and me. And Paul Reiser. Anyway, the three of them were going to Atlantic City for the night as they did often. Usually they’d go there pretty late – between 6 and 9pm – and wouldn’t come back until somewhere between 2 and 6am. On this particular night, my dad wasn’t feeling too well. He was on the fence about whether or not to go in the first place. But Mark has a way of whining people over (yes, that was intentional). “Come on Glen! Jack is all the way up here from Maryland. How often do we get to do this? I’ll drive. And we don’t have to stay too late, I swear.” And so dad was off to AC with John and Mark, not technically against his will.

The details of certain things have still never fully been explained to me. Like I don’t know what “a lot” means when he said that “Mark was down A LOT of money.” $150? $500? $75,000? I’m not sure. But it doesn’t really matter. The inflection in his voice gave me all that I really needed to know.

My dad had lost his allocated $200 for the night and was ready to leave at midnight. John could have stayed or gone, but was empathetic for my father’s growing unrest. However, Mark was down A LOT and his body language at the poker table said that he wasn’t leaving anytime soon. As did his mouth when my dad asked again at 1:30. And with every minute that passed and every dollar that was lost, my dad felt more uncomfortable, Mark felt more agitated and John was stuck playing mediator. “Hey man. Just give me the keys to drive Glen home and I’ll come back and get you.”

“Just wait another damn minute. As soon as I get back to [$???], we’ll fuckin go!” It was a 3-hour round-trip drive. And Mark was a time bomb with a quirky fuse that could fizzle out or blow any minute.

My dad had been leaning against the wall holding his jacket for hours now. His eyes were uncontrollably closing and his body needed a bed. John was getting irritated at Mark’s list of priorities. “Hey man. Could we at least borrow $100 to get a cab. Glen needs to get home.”

“FINE!” Mark grabbed his jacket and stormed out in the middle of whatever he was doing at the moment of the impact of that comment. He speed walked to the car and my dad lagged behind, John with him and yelling at Mark to hold up. “Well, hurry the fuck up you wanna go home so Goddamn bad!” Awesome.

Once on the Atlantic City Expressway, Mark was going about 130 mph, as if outrunning the sunrise. It is important to note that these three men don’t drink. Anger was Mark’s only drug of choice that night/morning. My dad started to get uncomfortable. “Hey. Mark. You think you could slow down a little bit?” He did. So now he was going 20 mph on the AC Expressway in obvious defiance. John asked him to pull over. “Why?”

“Because I’m gonna beat the shit out of you.”

That’s where the story ends for me, but I think that’s where it should. Maybe they fought, maybe they drove home in peace. Either way, they did it all again a couple months later, I’m sure. That’s how close dad was with his brothers and sisters. And because this is a part of his life that I wasn’t a part of, it’s great when I get together with the siblings. Because these guys remind me of a part of my dad outside myself. And I’m sure I remind Mark, John and the whole family of another side of him they didn’t see all the time. But this story sums up the relationship that he had with his siblings and though it’s probably not one I’ll ever really have with them, I get closer to it every time I see them, as we no longer have to worry as much about the adult/child boundary. Thanks for sharing, dad. You are still missed by many, many people of all generations. 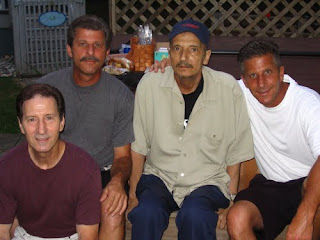 2 thoughts on “Dad Memories: Three of a Kind”