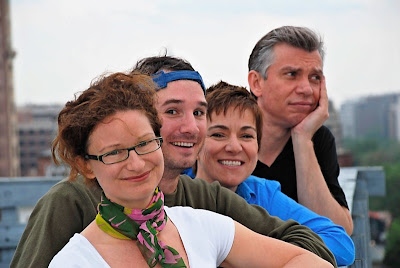 The crowd wasn’t as lively tonight as Saturday or Wednesday night’s crowd during the first 15 minutes of the show and we could all feel it. This is partly the design of the show, as the beginning is more analytical and interesting than it is gut-busting funny. But as a comedian, I know the importance of starting strong, as laughter will snowball once the first big laugh starts it down the hill. I had prepared to hit them with some energy when I got the chance to get to Brick Street. But that was still a while away. I was hoping they would connect with Molly or Kevin’s stuff before then. And they did in pieces, but not like the past couple shows.

Molly had just ended her first solo story and it was time for Kevin’s Blind Lesbian story when he shot up out of his chair with “David and I are cruising around town in his candy apple red convertible…” This is a really high energy part of the production and I was hoping it would start the crowd down that hill. And it did. Kinda. But after a minute, I feel Molly looking at me. This hadn’t happened yet. I look back and she has a confused look on her face. I think nothing of it and go back to watching Kevin and the crowd. A few minutes later, I realize that this is not the Blind Lesbian story. This is the Beach Trip story. I start to sweat. I’m supposed to go up after the Beach Trip story, but about 15 minutes from now. I don’t want to cut off 15 very important minutes of our production. Crap. My heart beats louder. I pee a little bit, but no more than my boxers can handle.

Molly and I talk behind Kevin. I tell her I’m not getting up as I don’t want to skip all that time and whoever was supposed to go after his Blind Lesbian story should hopefully realize to go now and he can just switch the order and I’ll know to go after his newly reordered Blind Lesbian story in 15 minutes. That’s what I tried to communicate to her but I only said like 4 words. I had hoped it got across. Truth be told, I knew my cue and I knew I wasn’t supposed to go up for another 15 minutes, but I couldn’t remember the exact order of who was next. I was just hoping Molly or Jenn would figure it out and I wouldn’t have to be the one to get up and cut off a good portion of the show.

Kevin is about done the Beach Trip story. He starts to sit down. No one got up. I was scared. Like the opening scene of Jaws kinda scared. This only lasted but a second though because just as he sat down, Lady Gaga came over the speakers, as if a voice from God himself. Telling us that it would be OK. That He was aware of the order of the show and would carry us through this hard time. And sure enough, Jenn got up just like she was supposed to. She later said she didn’t even realize what was going on, but heard Lady Gaga and involuntarily stood up and started speaking, like a Pavlovian dog. And then Molly did her thing and Kevin did the other thing and I did my thing and we were back on track. And sure enough, I looked back at those 5 tense minutes of the show during Kevin’s reordered story and there were only one set of footprints. And they were Lady Gaga’s.