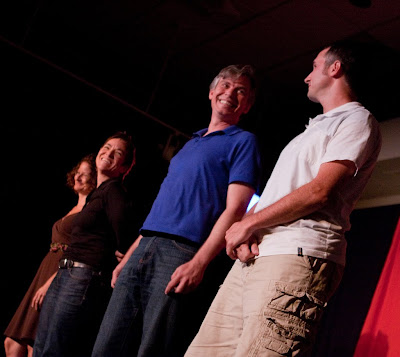 Sunday night. Fifth show of five in our run. We’ve been sold out since Tuesday but 8 standing room only tickets are made available because so many people were upset they couldn’t see the show. They sell out with little to no marketing efforts. And I know it’s just 8 tickets, but it’s still awesome the way it happened. Good Joe flew into town from Boston to see this show, which I would like to address further in another post later this week since it is likely the single greatest act of friendship I’ve ever had the fortune of experiencing.

This would be the last night I would spend with Logic, Luck and Love for the foreseeable future, though there have already been conversations about setting up some more dates. Jenn, Kevin, Amy and pretty much everybody involved in the show but me are in charge of figuring that out. So if you missed it and you’re reading this, there will almost definitely be other opportunities to check it out sometime in the future.

For whatever reason – maybe all the people I knew in the crowd, maybe because we hadn’t performed in 3 days or maybe because it always happens – I was just as nervous as Opening Night. I had the extra added pressure of needing to project with a partially-wounded voice. While I was smart enough to not play in my football game that morning, I was not smart enough to remember not to yell. I remember leaving the field thinking “Oh crap. I yelled my throat sore again… HOLY SHIT!” But it turned out fine. The whole night turned out fine. Great, in fact. From the hustle to get this show prepared to the after-party at the Fringe tent. This has been the most incredible experience in my performance career thus far. Well, probably. I’ll let you all know after the mandatory 10-day cooling off period. Until then, you can count on me writing a lot more about it. You know, now that I’ve freed up some time in my schedule.