Shattered Glass vs. Stranger Than Fiction 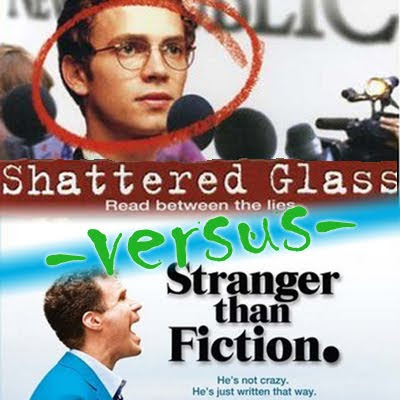 Bout#3: Two articles in a row with the same title. This time, I got to see a based-on-real-life movie my last day of class about a reporter named Stephen Glass who falsified all his sources (Shattered Glass) and the Will Ferrell movie about him realizing he’s a character in a movie (Stranger Than Fiction). I have a feeling I know how this is going to end.

Funnier: Will Ferrell stepped out of his physical, Old School-style brand of comedy for a more challenging and subtle role with perfection. This was really heady as opposed to his normal stuff, but I may even give Das Boot the nod above the lack of humor in Shattered Glass. Point, Stranger Than Fiction (0-1)

Better Turn: In Shattered Glass, Billy Zane catches our main character in a lie in one of his stories, which we begin to find out is completely fabricated. In Stranger Than Fiction, Will Ferrell hears the author say that he is going to die. The turn was probably the best part of Broken Glass, but it didn’t match the intrigue created when Will Ferrell hears the narrator, who’s been narrating his life for at least the last few days, say that he’s going to die. Point, Stranger (0-2)

Better Ending: Go figure that a movie about not knowing how to end a movie wouldn’t really know how to end itself. But Stranger tackled that head on and managed a touching ending anyway without completely cheesing it up. Shattered Glass, however, had a scene where people applauded the formerly despised boss after they realized he was correct in questioning the beloved Stephen Glass’ sources, complete with a cheesy slow zoom in on the faces of his old best friends. Point, Stranger (0-3)

Better Message: I don’t know that I could actually discern any real message from Stranger, but thankfully I don’t need to. As Shattered Glass was based on a true story, it definitely has a leg up, but it also tells an important story about journalistic integrity. Not just about how it’s wrong to falsify sources, but also about how easy it is to fall into that trap and where that line is and where do we choose to draw that as a reader. Interesting stuff. Point, Shattered Glass (1-3)

Better Acting: I have a special place in my heart for Chloe Sevigny and Hank Azaria, but Will Ferrell was justifiably nominated for a Golden Globe while Dustin Hoffman, Emma Thompson and Maggie Gyllenhaal kicked the puck back onto the ice for him. Point, Stranger (1-4)

More Creative: A movie about a character from a book that actually exists and starts to hear the first person omniscient narrator talking about him so he seeks the assistance of a writing professor. That is one of the most original stories I’ve heard of recently, especially compared to a real story. Point, Stranger (1-5)

Watch again: I will likely never watch Shattered Glass again, whereas I watched Stranger twice before I returned it to Netflix. Yes, I liked it that much. Point, Stranger (1-6)