The Rookie vs. The Tourist 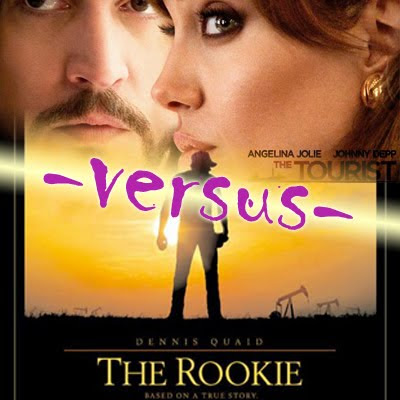 Bout #4. Same name but now with two new categories. I didn’t feel like I was getting the full humor potential out of this concept, so I’ve added sections on the title and poster of the film. All in all, it probably won’t be officially representative of which movie I prefer, but who the hell really cares about that?

Title: Very similar in concept. Minimalist, really. A single 6-letter noun in both cases, not even using the full amount of scrabble letters. Though both describe the protagonist of the film, The Rookie is more tongue in cheek, and those are my favorite kind of tongues. Point, The Rookie (1-0)

Funnier: Wow. Tough question. I don’t recall either movie really making me laugh, despite The Tourist being labeled as a “comedy.” But the kid from The Rookie is the same kid from Two and a Half Men. That’s gotta be worth something. Point, The Rookie (2-0)

Better Turn: In The Tourist, we find out Angelina Jolie is really with the British Feds (whatever), which we kinda knew anyway. In The Rookie, Dennis Quaid gets called up to the big leagues, which we definitely knew since it’s based on a true story. BUT, when the scout said “If I call in a 38-year-old pitcher, I’ll get laughed at… but if I don’t call in a 99-MPH fast ball, I’ll get fired,” it made it worth it. Point, The Rookie (3-0)

Better Ending: Things aren’t looking too good for The Tourist. Boy was this ending cheesy and formulaic. I actually didn’t see it coming because I thought that it would be too horrible to end it with such a cliché. I was unfortunately wrong. Point, The Rookie (4-0)

Better Message: And, it’s over folks. It says right on The Rookie’s poster “It’s never too late to believe in your dreams,” which at worst could be considered misleading. The Tourist’s poster says “It all started when he met a woman” and the story doesn’t really have a message at all. Point, The Rookie (5-0)

Better Acting: Not that Johnny and Angelina aren’t great actors and didn’t sell me on the bullshit ride I was supposed to be on (I really didn’t like this movie), but the final scene when Dennis Quaid throws his three fastball strikes and then very sternly and uncelebratorily (sp? (real word?)) walks off the mound and into the dugout was brilliant and moving in its realism. Point, The Rookie (6-0)

More Creative: OK, we’ll get The Tourist on the board to avoid the sweep. It’s hard for me to give the nod for creativity to based-on-real-stuff movies compared to fiction. It’s the yang to the “Better Message” yin. Point, The Tourist (6-1)

Poster: A close-up of Johnny and Angelina was all you needed to know about that movie anyway. The Rookie, however, showed a silhouette of Dennis Quaid against a sunset, a perfect metaphor for it not being too late to believe in your dreams without forcing one to gag on it. Point, The Rookie (7-1)

Watch again: The Rookie. It turns out the scene with the radar gun isn’t as emotional the second time around when you’re anticipating it, but it still has a lot of memorable scenes in it that I didn’t remember from last time I watched it. In case that makes any sense. Point, The Rookie (8-1) 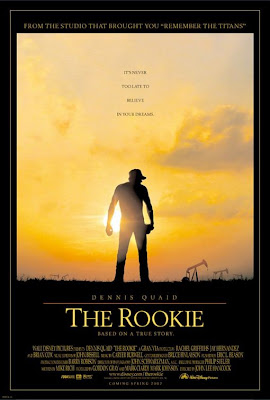