Thank you, Nate Coleman. I can go to work this week.

Jim Harbaugh is an asshole. Can we please just call a spade an asshole spade? Both Mike Ditka and Merrill Hoge said on ESPN “That’s just 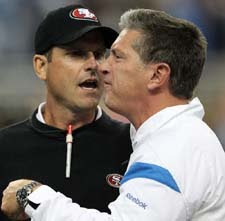 Jim Harbaugh.” When as a society are we going to stop using that phrase as a license to be an asshole? Hey. What’s with that guy killing all those Jews? “Oh, that’s just Hitler.” Now I’m not calling Jim Harbaugh Hitler by any means, I’m just pointing out the flaws in that line of thinking, which is unfortunately all too prevalent in the world today. Authenticity of one’s own character is more respected in our culture than being a nice guy. And it breeds assholes and gives them an excuse not to change. Well, I’ll say it. The guy’s an arrogant asshole. You could easily see that when he coached Stanford and went for two late in the game against USC when he was winning by 30. Remember that post-game handshake with him and Pete Carroll? Remember “What’s your deal?” Thankfully, they get to shake hands twice each season. I’m hoping one of them ends with Pete Carroll slapping him in the neck.

And why isn’t anybody talking about the exposed tummy skin he shot on the way to the handshake? It wasn’t a damn accident, morons. This is cut from the same cloth the NBA thugs and the ballers on Light Street in B-more use to show they’re disrespecting someone. A little flash of the nip to let you know. If I were Jim Schwartz, I wouldn’t have let him shake my hand and shove me aside because I’d be too busy punching him in the newly exposed gut. As mentioned, there’s a post-game protocol in this league – nay, in EVERY league – and somehow, almost impossibly so, Jim Harbaugh made it this far in life without ever learning that you aren’t supposed to act like a brash asshole in front of the team you just beat. You can learn that lesson from your local tee ball team. Run into the locker room and call their wives ugly and bust on their post 9/11 economy, but for the love of shit, act like you’ve been there before.

And will one of you media circle jerkers please finish up and call him out on this? He isn’t Brett freakin Farve. He’s been in the league for 6 games and granted, he has an 83% win percentage, but grow a testicle please. If everyone is afraid to be the outspoken one to get banished from the Harbaugh Christmas Card list, then I guess all we’re going to hear is “That’s just Jim Harbaugh” and nothing will change. Not even a damn fine.

Bullshit Call of the Week: AJ Hawk was fined $10,000 for flipping his own team the bird. Troy Pomalumbo was fined the same amount for calling his wife from the sideline to let her know he was OK after a concussion. Neither of the coaches involved in the bitchfest scuffle got fined at all. Bullshit.

Tough Guy Play of the Week: Pick on him if you must because I know you will, but Jay Cutler manned up last week and when Matt Forte decided to reverse his field completely, he threw a very effectively block against Jared Allen, who is a professional defensive linemen.

Fantasy Dud of the Week: I don’t think anybody’s gonna call me a hater for this one. Sorry Rex, but when you sign up to take the bad with the good, you’re eventually gonna see the bad. I’m just glad it reared its ugly head when it did. A close second fantasy dud would be Vince Young, who came into the game for one play and threw an interception in the same game. Thankfully, you were duddier.