Are you ready for some suckball? Because that Monday Night Mess most assuredly was not football. I feel bad for any Ravens fan (or one of the 47 Jags fans in the U.S.) who actually watched that game. I stopped watching 10 minutes into the second quarter and decided to lick the cat hair off my rug both because it made me feel more productive with my time and mostly because I needed to get that taste out of my mouth. 8 passing yards in the first half? Even Trent Dilfer managed double digits every half. I think. At least when the Eagles lose, it’s good TV.

This was also the week that we sent two unfortunate teams overseas to England to play a real game that actually counts in the standings. It’s important to note that these are real teams. With real heartbeats and real feelings and real jobs on the line. I guess it’s kind of a nice outreach program as far as England is concerned. They probably have a lot of buzz around it, being as it’s the only professional football game played there all year. Kinda like if we only had one soccer game played here all year. Per chance to dream…

I don’t believe in curses, but the Madden Curse is tough to ignore. This year, however, the curse bizarrely extended to everyone named Peyton (or Payton). There’s of course Peyton Hillis, with his strep, his hamstring and his agent bullshit. And then there’s Peyton Manning with his neck injury that may earn him a role as Andrew Luck’s next quarterback coach. And strangely there’s Sean Payton, the coach of the Saints that fractured his tibia and tore his MCL. He doesn’t play. That never happens. Even Walter Payton was posthumously exposed in a memoir earlier this year. Really? Can we stop coming out with this stupid video game please for the good of the mankind? And for God’s sake, please don’t let Dustin Keller make the cover next year.

Fantasy Dud of the Week: Congrats, Cinci. You got the better of this deal. Carson Palmer’s debut as a Raider yielded 3 interceptions and -1.36 fantasy points. And he only played in the second half. No Raider had thrown three interceptions in one half since… well, since Kyle Boller did it in the first half.

Fantasy Stud of the Week: And in the other corner, we have Kansas City’s defense. They had a total of 9 points coming into this game. That’s an average of less than two points per game. That will get you on collegiate academic probation. They busted out for 40 points in this game, bringing up their average to over 8 points per game. Nicely done, KC. That should help with your financial aid package.

Bullshit Call of the Week: What is the dirtiest play in all of sports? You may think it’s biting someone’s ear off after Mike Tyson lost his damned mind 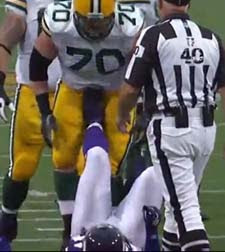 against Evander Holyfield. And you’d have a legitimate argument. But that’s an isolated incident of a man who got a tribal tattoo on his fucking face. The dirtiest play in sports is the intentional kick to the groin. And there have been few recorded that are as blatant as the one that happened last week in the Packers/Vikings game. Brian Robinson, a backup defensive end, kicked T.J. Lang as square in the groin as you possibly can. A flag was thrown on the play. This means that the ref saw it clear enough to call the penalty. And yet, that player was not ejected from the game. After having his face mask grabbed, Brendon Ayanbadejo of the Ravens (and a current University of Baltimore grad student) slapped a Jaguar lineman on the helmet with his open hand and got ejected from the game. This means there is a ref in the NFL who saw the blatant and intentional kick to the groin and decided it wasn’t dirty enough to eject someone from the game. There’s a guy that deserves a kick in the nuts.

Tough Guy Play of the Week: It isn’t too often that you see one of those special teams tackles that you can feel all the way in your recliner and then you look up to find out it was the kicker that made the hit. First he was the Sexiest Player in the NFL, and now Neil Rackers won my little award. He must be living right.

Overhyped Player of the Week: Tim Tebow could win this award every week, but at least he won it by actually playing this time. I will give him the credit he rightly deserves. He performed extremely well at the end of the game given the circumstances he was put in. If it wasn’t for the fact that Tim Tebow had put him in that position against the worst team in the league, maybe the Tim Tebow is a God argument would carry more weight. There is not a good Tim Tebow and a bad Tim Tebow. There is only one average, erratic and overhyped Tim Tebow, who dramatically triumphed over his own skill against an 0-6 team last week. Congrats. I guess.