Good freakin God! Can we just lose like a normal team? We gotta throw interceptions off people’s legs and shit? Sundays 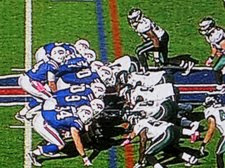 are supposed to be a stress relief, a break from the 6-day daily grind of the week. It is not working out that way, muchachos. Games like that one and the one we’ll probably lose to Rex Freakin Grossman this Sunday make me wish for the lockout again. Even my fantasy teams suck. Maybe I shouldn’t have named them all Vicktorious.

So this is about the point in the season when people start talking seriously about that undefeated thing. And right now there are two teams at 5-0 and the one thing I can categorically guarantee is that they will not both go undefeated the entire season. Because they play each other. Twice. And even if they want to go ahead and tie each other twice just to piss me off, they’re gonna have to finish that match in the playoffs anyway. But how realistic is this undefeated talk anyways?

Lions: Great story. Seriously. But they have to play the Packers twice. And they’ve only played one team with a winning record and that was the Bucs. And looking down the road, I can pick about 5 games that I would pick against them right now. Also, they’re one Matt Stafford injury away from being out of the playoffs. But hell, they haven’t lost a game (including pre-season) since Week 13 of last year. And that’s pretty damn good for the Patriots, let alone the Lions.

Packers: I know. They won the Superbowl, which makes them the best team in the NFL until someone else apparently wins the Superbowl. I don’t have time to point out the flaws in this methodology of thinking, but let’s take a minute to remember that they just barely got into the playoffs at 10-6 and were one DeSean Jackson punt return away from sitting on their couch watching the Giants beat the Eagles in the Wild Card round. Granted, they’re winning and healthy now and lighting up the highlight reels, but they’re not exactly in the top 10 in passing defense. Actually, they’re not even in the top 20. In fact, they’re not even in the top 29 (I really wanted to say 30. Damn you, Miami!). So eventually, they’re going to meet someone who can slow down their passing game just enough to score at least one more point than they do. Maybe.

The Colts, however, have an excellent chance of not winning a game the rest of the season.

Sportsman Play of the Week: Al Davis, the face of the Raiders for the last 50 years, died the day before their game in Houston. Houston fans came with silver and black signs commemorating his memory. The Raiders commemorated him by knocking out Houston’s best defensive player for the season and winning by accident and pretending to cry in public. Just win, baby!

Fantasy Stud of the Week: Really, the fantasy stud of the season. And it’s Wes Welker. His 740 receiving yards is more than anyone else by 131 yards and the most in a 5-game span in history. And he’s white.

Bonehead Play of the Week: Late in the first half, the Saints were driving to get into field goal range without a time out when they got tackled in bounds. The field goal unit had to try a Biathlon Field Goal* (where they have to run onto the field and then kick it real quick) as time was running out. Oh, and this was from about 50 yards. Ron Rivera, brilliant tactician that he is, called a defensive time out because he thought he had too many men on the field. Really? You couldn’t do a quick cost/benefit analysis of that situation and just give up those 5 yards one the chance that you were correct? Isn’t it nice to know that when all the pressure is on the other team, your head coach is the guy who is panicking the most?

Surprising Stat of the Week: They say the two biggest keys to victory in this league are running the ball and stopping the run. Guess who leads the league in rushing yards per game? The Eagles. And rushing yards allowed per game? The Cowboys. Suck on that factoid, stat people.

SUPER Bonehead Play of the Week: If I see Juqua Parker in the street, I’m going to yell hike. Just to see. That’s all I want to say about that.

* – For the record, I made up the term “Biathlon Field Goal.” Don’t expect to say it and have people know what you mean.