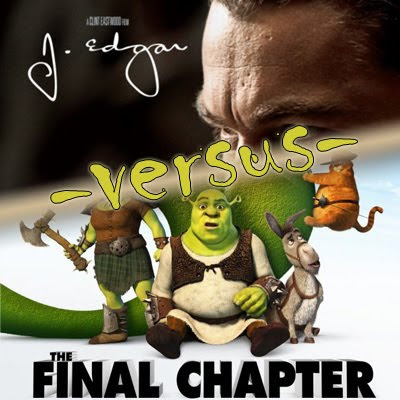 Bout #22: A movie about an ogre who loses his identity and wishes away his family vs. Shrek 4.

J Edgar: Sooooo, I already said this, but this isn’t that epic that everybody thought it was going to be. Epic fail, possibly. As quoted from my review of the movie, “In the end, it looks like Eastwood just needed to do something to do this year and not everybody golfs.” 4 bugs

Shrek Forever After: First of all, you have to like Shrek to like this movie. Nobody in the world is going to say “well, I wasn’t too crazy about the first 3 movies, but this one was awesome.” I like Shrek. Then, you have to accept it’s not going to be the first Shrek. Check. Then, you have to just sit back and accept a ridiculous sounding plot – even for an animated movie starring a talking donkey. Once this is complete, you will enjoy the movie. 6.5 bugs.

Title: J Edgar really wraps up what the movie is about, for better or worse, but it also mimics one of the most overdramatic scenes of the film where he has to choose between two names he’s been using for banking purposes and decides on – well, you know. It’s shot in a similar fashion to the discovery of the word “Rosebud” on Charles Kane’s sled, but with music more reminiscent of the scene from Alien where the thing busts out of the dude’s chest. (Point, Shrek 0-1)

Funnier: Hmm, didn’t even bother putting on running shoes for this race, did you? (Point, Shrek 0-2)

Better Turn: The turn is usually the plot point in which the main character is given a problem to overcome. I don’t know if J Edgar was ever given such a problem. (Point, Shrek 0-3)

Better Ending: What an overhyped and boring scene the cross-dressing scene was. It undermined from the big finale, which was the Winkelvoss twin finally getting the subtle nod of appreciation for his dedication to J Edgar, both above and between the sheets, or so he’d hoped. In the other corner, we have – surprise! – another music montage to a Carpenter’s song and a lot of happily ever after. Heads it is. (Point, J Edgar 1-3)

Better Message: Shrek is classic you don’t know what you got til it’s gone, but J Edgar is an avoid fun at all costs if you want to have a legacy in public administration. (Point, Shrek 1-4)

Better Acting: I think Leonardo DiCaprio liked the role so much he forgot to notice that the writing was crap. And it takes some bad acting to lose to a cartoon. (Point, J Edgar 2-4)

More Creative: Shrek 4 is pretty far, far out there (pun intended) and fills in some huge holes with some very obvious spackle, but the J Edgar screenplay feels more like a book report than a movie script. (Point, Shrek 2-5)

Poster: Close up photo of Leo talking. Just one poster. Good for branding. Shrek 4 has many. Most have some clever puns like “It ain’t ogre til it’s ogre” or “Where my witches at?” My vote goes to the use of fat Puss in Boots. (Point, Shrek 2-6)

Watch again: I don’t think I’ll ever find a good cause to watch J Edgar again, but I won’t rule it completely out. However, I can definitely see myself scrolling through the cable channels on a lazy Sunday (after football season, obviously) and stay on whatever channel Shrek would be on for a while. (Point, Shrek 2-7)

Overall: Yeah, I didn’t really care much for J Edgar, though I really liked the acting – even beyond Leo. Shame it’s only worth one point. Winner: Shrek Forever After (7-2) 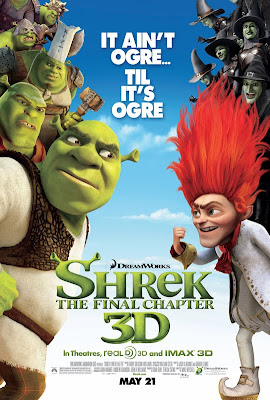