James Harrison is a dirty piece of crap and I’ll never root for the Steelers as long as he’s still playing for them. Sorry, Stryker. If you need proof of this, 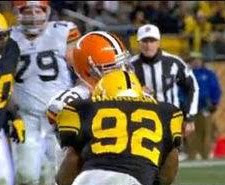 watch him after the play. There is a human being lying unconscious on the ground solely because of a hit Harrison made, regardless of intent or legality. Ten feet away, there is a yellow flag. Rather than show any remorse about the career or life he may have just taken away from said human, he whines to the refs about the little yellow flag. Fucking prick. (Ed note: he did go over to McCoy after whining about the flag, likely because a PR person told him to)

I had a law student in our basketball league who was convinced that the refs, supervisors and commissioner were unfairly calling flagrant and technical fouls on him more than any other player in the league. He thought “we were out to get him.” His words. A third year law student never bothered to consider that the only common link in all of his indiscretions was him. Occam’s Razor suggests that maybe he and James Harrison are the real perpetrators. Though I’m willing to bet that Harrison thinks Occam’s Razor is what terrorists use to shave with.

Then Harrison defended his actions after the game. Again. And once the fine comes, as we all know it will, Mike Tomlin and the rest of his team will defend him. Again. And that’s what makes this shit especially rank. When Ndamukong Suh stomped his way into a suspension on Thanksgiving, the team took him aside and said “Hey Ndamukong, grow the fuck up.” Though they probably used a nickname like Nads or Num-Num because they know him better than I do and it’s a weird and long name. Not the Steelers. They fully support having a hired hit man on their team. Which is all the more reason he needs a suspension. You want him to stop getting fined so he can afford to pay tuition for his children, tell him to stop headhunting people who might also have children to pay tuition for if Harrison lets them live long enough.

I understand. You need to play the game and can’t let quarterbacks run loose in the secondary. I get it. But you knew full well where you were hitting him. Don’t pretend we’re all stupid here. You’ve been doing it for years. You lost your plausible deniability. Just because he fooled you into coming off your man in a crucial 2nd down late in a very losable game doesn’t give you the right to take two steps, and rise into his head, no matter what you’ve convinced yourself the rules say. You’re a thug through and through and need to get a lesson in sportsmanship. I was careful not to use the word “learn” because I don’t feel you’re capable. Suspend him, Goodell. Or get David Stern to do it for you.

Hopeless Scenario of the Week: So all the Eagles need to do is win out against the Dolphins, Jets, Cowboys, Redskins (it could happen), have the Giants split their two games with the Cowboys, have the Cowboys lose their other scheduled game against the Bucs (why not?) and have the Giants lose one of their other two games to the Jets and Redskins and we’re in! OR the Giants can sweep the Cowboys and then they need to lose all their games BUT the Cowboys would be permitted to beat the Bucs. Probably a more likely scenario. However, in both of these scenarios, we need to win all our games and winning has been our Achilles Heel all year. We can always count on the Giants and Cowboys losing in December (Arizona? Seriously?), but we still need to actually win. Oh well. It’s fun to figure out scenarios. I’d look into our wild card chances if I didn’t have to sleep tonight.

Sportsmanship Play of the Week: Not a lot of players actually acknowledge that people on the other team can dictate how the game goes. Most of them think that if they won, it’s because of something they did well and if not, it’s because it’s something they did wrong. After a one-handed TD catch by Hakeem Nicks in a very tight game against the Packers, Charles Woodson actually gave him a fist bump of approval. Then James Harrison shot them both in the face with a bazooka.

Bonehead Move of the Week: Oh, Dallas. By now, you know about the icing your own kicker time out. But here’s why it happened. With 26 seconds left and TWO time outs, Dez Bryant got the Cowboys a first down at the Cardinal’s 31-yd line. Rather than call a time out, they ran it down to 7 seconds and spiked the ball. Then they tried to rush the field goal team out on the field without calling a time out to justify having not called a time out. But they didn’t do it in time, so they called one. It obviously looks worse because they made the first and missed the second. But either way, it’s still a bonehead move. Everyone on that field and at home in their TV sets other than Jason Garrett and Tony Romo would have called a time out to try to get more yardage for their rookie kicker. Like Aaron Rodgers for example.

Second Chance of a Lifetime: Dan Orlovsky is known mostly for running out of the back of the end zone on his way to leading the Lions to the only 0-16 season in NFL history. He is now starting the last four games for the 0-12 Colts in place of Curtis Painter. A single victory in those four games would probably be complete vindication for his last 0-16 season. It is his Superbowl. And his best chance will be a Week 17 game against the Jaguars. Flex, ESPN?

Weed of the Decade: Dear Brett Favre, Shut up and go away. We’ve moved on. Sincerely, Everyone.