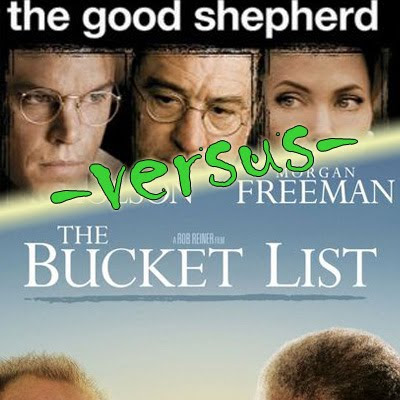 Bout #23: I really wanted to see Bucket List before I died.
The Good Shepherd: You have to earn a 2 and a half hour long running time. Lord of the Rings, Harry Potter, movies that you could convincingly put the word “epic” in front of. This was a waste of at least 2:30 of that 2:40 running time. 1 bug
Bucket List: There weren’t many surprises. I knew what I was getting into when I plugged it in. And I have heard of the two main actors before and assumed they’d do a serviceable job. Well, they did. And yes it was cheesy, and yes it was formulaic, and yes it was awkwardly paced, but it was touching and real when it needed to be. And it sprinkled some real pieces of philosophy into the gratuitous skydiving and car racing scenes. 6.5 bugs.
Title: What the hell is this guy shepherding? There were no sheep anywhere. And it wasn’t a religious metaphor either. At least I doubted. I stopped paying attention two and a half fucking hours into the movie. (Point, Bucket List 0-1)
Funnier: I’m so used to thinking about Jack Nicholson in terms of A Few Good Men and The Shining that I forget how funny he can be when he wants to be. And John Turturro actually said that Matt Damon had no sense of humor. The same could have been said about the movie. (Point, Bucket List 0-2)
Better Turn: I just forced myself to try to recall what might have been the turn in The Good Shepherd, which I just saw last night, for the last 30 seconds. I farted twice and my eye won’t stop twitching. I’m taking that as a sign. (Point, Bucket List 0-3)
Better Ending: I can remember the ending of the Good Shepherd. It still sucked, but it was memorable. But not worth a point. (Point, Bucket List 0-4)
Better Message: I’m guessing there was a message in there somewhere about loyalty to one’s country or one’s family and what is more important. Kinda like the first season of 24. Only, this movie felt like it took longer to watch. (Point, Bucket List 0-5)
Better Acting: I can’t believe so many big time people were involved with this stupid movie. Damon and Angelina – even Alec Baldwin, Timothy Hutton and DeNiro himself totaled about 13 minutes of screen time. And Joe Pesci popped into a scene 2:04 into the movie. I guess everybody wanted to be a part of Bobby DeNiro’s directing debut. Shame he didn’t get an editor with some balls. (Point, Bucket List 0-6)
More Creative: Creativity is not Bucket List’s strong suit. But it doesn’t take much to beat The Good Shepherd in any category. (Point, Bucket List 0-7)
Poster: “The best spy movie ever” – Larry King. It may as well have said “Larry King wants to beat off Robert DeNiro.” And DeNiro is on the cover, despite his less than 10 minutes of screen time. The fact that there’s not a slogan trying to convince me that The Good Shepherd is a good movie is enough to give Bucket List a point. (Point, Bucket List 0-8)
Watch again: Honestly, I almost want to watch The Good Shepherd again, just to make sure I didn’t miss anything, because I really didn’t get anything. But it’s over two and a half hours. Maybe if they edit it down to a 43 minute version, I’ll watch it again someday. (Point, Bucket List 0-9)
Overall: Well, you’d think Bucket List is my favorite movie after seeing this score. Truth is that some of my Intro to Video student final projects could have put up a perfect score against that other travesty of a movie. Winner: Bucket List (9-0) 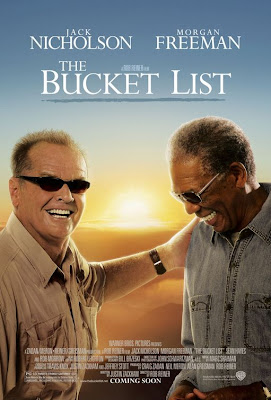