We did it to ourselves, society. We all stood arm in arm and when one person took a step forward, we all took that step forward. 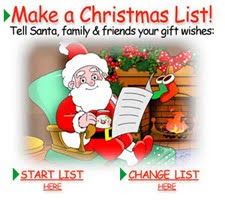 Maybe it’s always been like this and I’m just remembering wrong now that I’m older, wiser and don’t like to be told what to do – but I feel like people have forgotten the meaning of the word “gift.” There is certainly a place for Giftmas Lists for kids. I get that. But how is something even considered a gift anymore if you’re being told to buy it for someone? Gifts are supposed to be something extra, unexpected. Right? For a minute, forget what month it is and try to use the word in the sentence like “I just got you a gift.”

Remember what it means now? It used to be that Giftmas Lists were for kids and kids only. But now people have these lists on the world wide interweb where if you buy something, it comes off the list so that no one else will accidentally get another one for you. Practical, I grant you. But you can also see who got what for you when and what the hell is the point of even wrapping it? I will grant exceptions for weddings because this is a one-way exchange of gifts and knowing now how much I spent for everyone to come to my wedding, you damn well better get me something useful that we (Jenn) has already pre-approved! But the breakdown occurs when a bunch of adults are all asking for crap from each other. Especially because we’re now conditioned to get upset and talk shit about someone who gets you a gift you don’t want. What the hell? Didn’t they see my list? It’s on facebook. What’s the point in going out and getting somebody else something they told you to get them and having them get you something you told them to get you? Why not just get it your damn selves, exchange a polite nod and go take naps in separate rooms. Save everybody the time and stress of having possibly gotten the wrong “gift.”

I’ve lived poor. I know what it’s like to know if somebody doesn’t buy me a blender, I’m not going to have a blender. But I’m not going to put it on a Giftmas Registry. Because then, it wouldn’t be a “gift” as I define the word. Similarly, if you are an adult and have your own Giftmas Registry, you can count on me ignoring it. I will get you what I think you should have, like it or not. And that’s what a gift is. And if I don’t know you well enough to know what to get you, the fuck am I buying you shit anyway?

3 thoughts on “Giftmas Lists: The Second Day of Giftmas 2011”