A Giftmas Miracle: The Third Day of Giftmas 2011
Each year around this time, I wish for a Giftmas Miracle. This year is no exception. The wish is the same. The only difference is the enormity of the denominator. And yes, I’m talking about the Eagles making the playoffs.
Believe it or not, they’re not dead yet. Beaten and bloody, but with a heartbeat. They have a 1 in 28 chance of winning the NFC East. Well, this is true if every game was determined by a coin flip. Which, obviously, they are not. Which means we need either the Bucs or the Skins to win this weekend. Which makes me wish games were decided by coin flips.
1 in 28? Are you just making shit up, Dustin? I do make things up a lot. Guilty. But this is an actual number. I know this because it’s also the actual number of points we give up in the fourth quarter.
OK, so here’s how we win the NFC East. Ready? Because you may want to get a sandwich now and clear your schedule for the next 10 minutes. Also, all teams will be referred to by their abbreviation because I plan on typing a lot. Here we go… 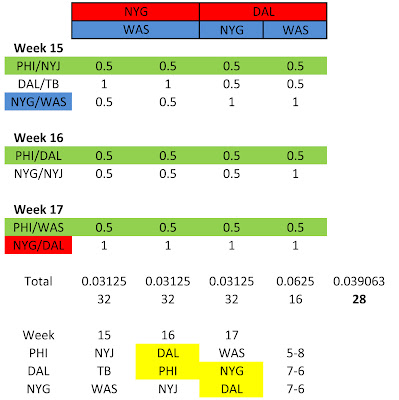