Rating Aspects of Giftmas Parties:
The Fourth Day of Giftmas 2011
One of the greatest byproducts of Giftmas is the amount of partying that is socially acceptable. Office parties, family get-togethers, drunken 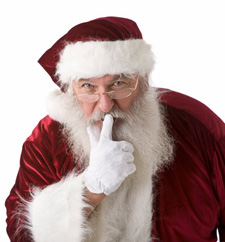 soirees with friends (soiree is the French word for religion-neutral winter party). Most of these parties are just a jolly old time. But some traditions are old and tired and need to be put to bed before Santa gets here. Here’s a quick rating of the different aspects of these holiday parties, whatever you want to call them:
Potluck:Brilliant. You don’t have to get it catered and people can show off their heretofore dormant baking and reheating skills. And there’s no ill will for bringing store-bought stuff. The snooties may turn up their noses, but it’s commonly acceptable to waltz in with Enteman’s or Nabisco or Pepsico stuff. And the guy who remembers to bring paper plates and plastic sporks is not laughed at. No! He is praised. People cannot wait for him to get there. Big fan. Downsides: disproportionate amount of cookies, food poisoning. A
Secret Santa: Great for cutting down on expenses. All for it. AND you still get a gift. BONUS! But nobody wants to get Uncle Dave. He doesn’t like anything/already has everything/doesn’t deserve anything. That’s the crappy part. I hear you. Especially when it’s that nose-ring girl from the satellite office nobody knows. And what happens if someone doesn’t show? Nothing, that’s what. But anything that lightens the burden on the wallet is a friend of mine. Just don’t make a big ceremony of watching everybodyopen their gift. Too much pressure. Everybody opens at the same time, thanks their person, their person thanks them. Oh, they had each other? Insert fake laughter. Then get the hell back to the eggnog. B
White Elephant: This is where you buy something and don’t label it and there’s a big game with different versions of rules that are never fully understood. If there are 30 people at your party, this game will take a full hour. BUT, it alleviates the necessity to plan anything ahead of time. So if Uncle Dave doesn’t show, it doesn’t matter. No circle is broken, no chain is unlinked. However, I participate in this version that has gotten a little too out of hand with the stupid presents. The gift isn’t worth it but it wasn’t supposed to be. Unfortunately, it’s also not worth the time. I’d rather be watching A Christmas Story again. B
Saturday Night Parties from 12/10-12/20: For crying out loud, I have two parties to go to every year and they have fallen on the same date over half the time. It needs to be the weekend because we’re young and like to party. Or we’re old and have jobs and kids. Understood. But the best Giftmas party I ever went to was on January 4th. No conflicts, no other deadlines to meet and I could regift the crap I didn’t like from before. And it alleviated the depression that came with the realization that the holiday season was over and the work season was back. More people need to do this. D+
Dressed-up Santa:Good only for parties with kids. Unless it’s a stripper Santa. Either way, there’s a lap involved. B+