I haven’t seen every Christmas movie ever. I still haven’t seen Miracle on 34th Street or all seventeen versions of A Christmas Carol. Also, I can’t remember how I got home from work today, so there are some movies I maybe don’t remember anything about at all. Furthermore, my criteria for the following list is based almost solely on what I want to see again right now. And I’m thirsty. Who knows what the list would be like if I had a slurpee right now? Hard to say, but I bet Home Alone would be on there. [Spoiler alert: It’s not]

Also of note is that these are all Christmas movies in the sense of both words. They are not Hanukkah movies – of which there are none – or TV specials, of which there are 4,387. Also, they are all feature films. Apologies to The Grinch That Stole Christmas and all its stop-motion friends. Not to mention Night of the Meek, a Twilight Zone episode which happens to be my favorite Christmas-related show of all time and possibly my only actual Christmas tradition. Given these variables with this criteria, here’s what I came up with. 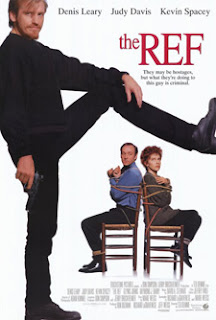 10. The Ref: First of all, it has nothing to do with officiating. So don’t keep watching, expecting a basketball game to break out. Instead, Denis Leary breaks into a house and forces a bickering couple (including Kevin Spacey) to pretend he’s their therapist during a Christmas party. I know it sounds like the plot of It’s a Wonderful Life, but there are a few variations worth watching this version. Tomatometer: 76%

9. Gremlins: So how exactly are we supposed to bathe these creatures? I’ll bet they’d make great pets for the Wicked Witch of the West. And when exactly does “after midnight” end? 5am? 3:45am? 12:01am? And who the hell likes bright light shined in their face besides interrogation victims? So the movie is not without its plot holes. But it’s a cultural icon now. And who didn’t name their hamster Gizmo when I was 13? Tomatometer: 79%

8.  Lethal Weapon: Yeah. It’s a Christmas movie. Which means you can probably figure out what #1 on this list will be – but let’s take a look. It opens with Jingle Bell Rock and has a marquee scene in a Christmas tree lot. And it ends with the suicidal Mel Gibson (pre-crazy, or at least pre-dangerously-bigot-type-of-crazy) giving Danny Glover the gift of the bullet that he was going to use to commit suicide. That probably wasn’t on his amazon.com registry. Tomatometer: 90% 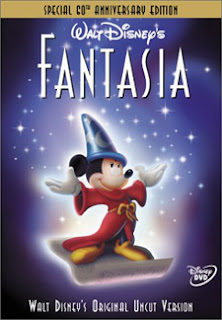 7. Fantasia: How is this not on top lists of Christmas movies? Who can possibly listen to the Nutcracker Suite without thinking of dancing tea cups? I used to think that movement in the Nutcracker Suite was actually called “Dance of the Tea Cups.” So I’m putting it on my list of favorite Christmas movies, despite that it has no plot to speak of and only one of the seven vignettes has anything to do with Christmas. My list, my rules. Tomatometer: 98%

6. Bad Santa: “Fuck me, Santa. Fuck me, Santa.” So no, it’s not your six-year-old daughter’s Christmas movie. It doesn’t try to be and it wears that on its CD cover. Not that any Billy Bob Thornton movie is for kids, but especially not one that taints the image of their favorite person in the world. But his relationship with the retarded kid (his word) is touching, much in the same way that moving a dying bird from the street to a yard is touching. And I owe this movie for the introduction of Lauren Graham to my life. Tomatometer: 77%

5. Trading Places: What the world needs now is another morality play disguised as pop cinema like this was. Eddie Murphy and Dan Aykroyd in their prime. A dollar bet that ruined the life of a man for the amusement of old rich folks who get sucker punched in the wallet in the end. All set mostly – or at least enough to qualify for the list – over Christmas. Tomatometer: 89%

4. A Christmas Story:I cannot remember the last Christmas when I didn’t watch at least 25 minutes of this movie. I can probably recite it verbatim without even realizing it. Tomatometer: 89%

3. Love Actually: This was the original. Before Valentine’s Day and the dreadfully rated New Year’s Eve, there was this intertwining vignette-style romantic comedy that was more genuine than cheesy. The cool thing about this is that everyone talks about their favorite part or this part sucked but I liked that and that part was over the top, etc. But all anybody says about Valentine’s Day is it wasn’t as good as Love Actually. It’s worthy of the attention it gets. Not to mention that Colin Firth donates his time to a rather decent role in this. Tomatometer: 63%

2. Elf: Will Ferrell at his absolute best. I have publicly decried almost every SNL performer turned actor (Chris Kattan, Jimmy Fallon, Chris Kattan), but Will Ferrell has proven whatever he’s needed to prove to me, wrapped up in this role. He makes you believe that he’s really a human who thinks he’s an elf. And he has stop-motion animated snowmen as friends. And he enjoys whatever diabetes-inducing breakfast it was that he ate. There’s a reason USA shows it three nights in a row on back-to-back weekends every year. Tomatometer: 84% 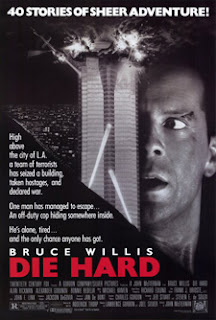 You got one I may have left off this list? Maybe you are a huge Tim Allen fan. Or maybe you hate Alan Rickman. Or maybe you think that it’s bullshit that I put Trading Places on here in place of the much more Christmassy Ernest Saves Christmas. Well, leave a note and we’ll see if your letters to the editor will get you on the back half of The 12 Days of Giftmas.