Valentine’s Day for the Married 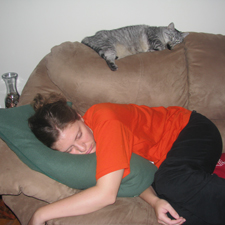 I’ve spoken almost exhaustively about the cynical haze that surrounds Singles Awareness Day in 1998, 1998and 1996(before I could write good), the Valentine’s Day Curse back in 2005, 2005, 2001, 2001, and 2001(not the best of years), saw a glimmer of hope in 2007only to have it dashed in 2008, got snowed in in 2003, did the most amazingly fun and playful thing back in 1996only to reap the fallout of it the next day, recounted my inner monologue during the sellout performance of Logic, Luck and Love on V Day last year, and I even wrote a poem and published an Application to be Dustin’s Valentine somewhere along the line. But this V Day marks the beginning of a new chapter of V Days. Valentine’s Day for the Married. Here’s how it goes.
Friday 2/10, Four days before V Day:I remind my wife that I don’t have class on Valentine’s Day. She tells me this is the first time she’s heard of it. I insist I told her earlier in the week. This argument lasts at least 5 minutes. I forget to ask her if she wants to do anything because I’ve been too distracted defending myself and trying to figure out if I actually ever did tell her my class was cancelled earlier in the week, like I had just vehemently insisted minutes earlier.
Sunday 2/12, Two days before V Day: I remember to ask her if she wants to do anything. She thinks about it. Something else happens. We forget to come to a conclusion.
Monday 2/13, One day before V Day:I convince Jenn that we decided we don’t want to go to a restaurant even though we never came to that conclusion. A student employee suggests I cook for her. I hadn’t even thought of that. I ask if that’s what she wants to do and she’s more than happy. She never wanted to go out anyway.
Note: I remembered a conversation we had over Christmas with my sister about love languages. We all have different ways we want to have love shared with us. I think there are five languages. Positive reinforcement, doing things with your partner, doing things for your partner but in separate rooms without seeing each other and two other things. I enjoy doing things with my partner while Jenn enjoys being right all the time. So if she wants to give me unsolicited incorrect feedback about the words to a Sara Bareilles song that happened to have been correct when they left my mouth, I’m going to let her. Because I love her.
Tuesday 2/14 @ 8:40am, V Day: I drive her to work in the city. During a chorus of Shoulda Been a Cowboy, she sings “Shoulda learned to roll around” instead of “shoulda learned to rope and ride.” Again, I support her. Then she asks if instead of me cooking for her tonight, if she could cook for me and I could just do her laundry. Sure thing, honey. So how different is Valentine’s Day for the Married? The answer is washing dirty socks.

1 thought on “Valentine’s Day for the Married”