A Rose is a Damn Rose, So Refer to It As Such 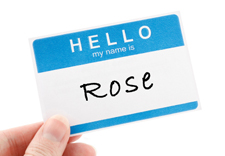 I found myself in an awkward situation at a bar with a girl recently. Since this never happens now that I’m married, I welcomed the opportunity to engage. A first-year MFA student from one of my classes approached me at a bar and very aggressively asked me if I knew her name. “[Her Name]” Blam! Right off the tip of my tongue like she asked if I knew how fast a Delorean needed to go to get back to 1955. Point, Dustin. Follow-up question. What’s her name, pointing to someone else in the program. Easy. Flux capacitor. It’s what makes time travel possible. I win. We then proceed to talk about class and the weather and other things that two people who know each other’s names talk about.
On the way home, I reflected on the situation. The implication of her question was obviously that she didn’t think I knew her name – and that I should. Does she think I don’t know anybody’s name? Or that I’ve been ignoring her? Am I that much of an asshole now that I give off an air of “Sorry, but I can’t be bothered with the names of all 25 people in my class.” I’ve never really been able to talk to girls, but now it’s because I’m not sure if I’m allowed to. Maybe I didn’t win. Perhaps it would have been better if I didn’t know her name. I did prove that I indeed knew who she was, but something in my character apparently smells arrogant or indifferent to some people. Or maybe she just thinks I’m stupid and couldn’t possibly have the mental acuity to remember everybody’s name. Or maybe she asks everybody if they know her name. Which is a weird opening line. But hey, I’m no expert with opening lines. I once said to a Young Democrat “So…” and then stared at her for the longest 25 seconds in both of our lives. I still think about her every Election Day.
As I was leaving, I went to say goodbye to this room full of girls when I noticed a guy in there with them and blurted out “Cock in the henhouse!” No one at the table had ever heard of that saying and/or it’s more offensive than I think it is. Recommendation. Don’t use that saying in mixed company without doing considerable more research on it than I did and/or you don’t care if the people there think you’re an asshole.

2 thoughts on “A Rose is a Damn Rose, So Refer to It As Such”