Touchdown My Pants: The 5th Day of Giftmas 2009

There are a lot of things in my life that I’m more proud of than I probably should be. Being able to diagnose my own injuries without seeing a doctor; 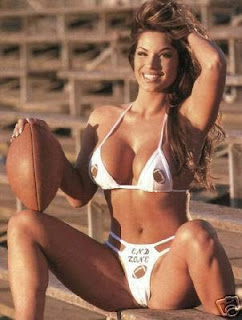 For those of you who don’t know what fantasy football is, it’s basically D&D for people who make fun of the people who play D&D. We make our own team of NFL players and score points based on how well they perform each week. See, it’s totally different. And then we talk shit about our teams to each other like we had something to do with their success. It’s the last refuge of the unathletic. And it works with almost 100% success. Whereas you used to have to be athletic to brag about your sporting prowess, now you can stay connected by studying real athletes on the internet and television. Congratulations, America.

But this season marks a first. Touchdown My Pants (my fantasy team) won the fantasy championship which means I will actually get money for all the hours I poured into studying these real athletes. And so Jen and I went to Outback last night and I splurged on the 12 oz. rather than the 9 oz. that I normally get. It was still just meat loaf, but I was content. And we cheersed each other and proclaimed loudly “Here’s to Touchdown My Pants!” An elderly couple near us turned red. Three guys at the table across from us bought us a couple shots. The waitress gave us a free dessert. Thank you, Joshua Cribbs for your timely kickoff returns.

He admittedly stole this from a comedian, but we can’t think of who, so Dave gets a point for now.