I finally went to the doctor today. Apparently 10 straight days of coughing up phlegm is my limit before see 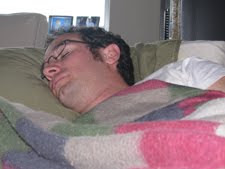 king professional advice not found in chicken soup, orange juice or the four different over-the-counter drugs that have thus far only managed to cure my ability to sleep. And strangely, Nyquil was the worst culprit. It apparently has the complete opposite effect on some people, which is weird. I understand it not working, but actually having the adverse effect? Kinda like a food that makes you hungrier when you eat it. Or toilet paper that adds more crap to your ass. (Why would he go there?)

The doctor actually had a med school student with her. She was hot, but not very bright, much like a lamppost I know. Anyway, I got a prescription for cough suppressant and antibiotics and found out that I almost have bronchitis. Here’s some shit I didn’t know until today and I’m 35. Bronchitis is just a fancy way of saying “you’ve been coughing for 14 straight days.” That’s it. No viral or bacterial invasion necessary. Not even a tongue depressor is required to make the diagnosis. Just some idiot saying “Hey. Haven’t you been coughing for like, the last two weeks?” So I have 4 more days to make it official. I feel amazingly confident right now.

I took off work yesterday to try to figure this damn thing out. And I came to an amazing conclusion. It was a great idea. It’s been a heck of a long time since I actually had a sick day that didn’t involve an eerily-worsening sleeping pattern or golf clubs. In fact, I only took one sick day off my entire 7 years at UMBC. And it was two days after I ruptured my Achilles tendon. I even went to work the day after I ruptured it. I’ve since come to realize I’m not that important. Additionally, those sick hours will leave if unattended to, unlike parking tickets and student loans. Vacation hours will pay out at the end of a job, but the sick hours just disappear if I remember correctly. So why the hell save them? Especially when I can justify it with… drum roll… an illness. Gary had saved up enough sick days to give him a summer off for his heart surgery. That’s brilliant. And way too far into the future to plan for. Once again, I’m not that important. I have over 21 days of sick leave right now. Paper cuts may begin to qualify as a debilitating injury.

I spent most of the day not talking. That was my goal. And it was relatively easy to achieve, even though the cats seemed to especially crave the occasional witty banter. I can drink fluids and take medicine and even sometimes golf at work. But I can’t shut up. So I spent most of the day in a makeshift chem lab trying to figure out which combinations of medicine and food seemed to generate more or less phlegm than normal. Unfortunately, my findings have been thus far inconclusive. Hopefully the behind-the-counter meds will be worth the rare trip to the doctor that doesn’t involve a ligament or persistent rash.