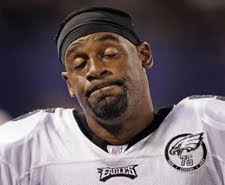 his is just one of those times when my loyalty is being tested. But I wouldn’t be human if I didn’t question why You would allow Sir Donovan to be traded within the division. I’m not necessarily a religious man, but to me, football is a higher calling. I worship at Our Lady of the NFL every Sunday and pray to the divinity of the Quarterback, Head Coach and Left Tackle.

I am here to ask for a miracle and I know you’ve granted them before. I’ve seen your work come to life in the form of the Immaculate Reception, the Holy Roller and the Music City Miracle. I know you rarely intrude into the business of personnel trades, but I remember back in 2004 when T.O. was a Raven for like 13 hours and then somebody yelled “do-over” and then he was an Eagle. Could you please do that again? I didn’t say anything about Brian Mitchell or James Thrash or even Jeremiah Trotter. But this is testing the boundaries of my loyalty as an Eagle fan living in a Redskin world.

My loyalty, first and foremost, will always be to the Eagles franchise. I believe in their front office and trust in this business move, as painful as it is for me. But I also have an allegiance to #5, as a great guy, despite T.O., Rush Limbaugh and the growing majority of haters in Philadelphia who can’t recognize how good of a player he is because he didn’t win a Superbowl. Philadelphia fans are stupid. On WIP, more than one person volunteered to drive him out of town because they hated him, a man who won more games than everyone but Tom Brady, Brett Favre and Peyton Manning in the last 10 years. And for that ass hole and the legions of morons like him, I hope for the success of Donovan. Because I have an allegiance not only to the Eagles and #5, but also to a good story. And it’s almost worth the success of the Eagles franchise to me just to see those haters eat crow. I’m not saying that I’ll ever cheer against the greatest team in any league that there ever could be, forever and ever, Amen. But when the day comes, depending on how things play out, I know I’ll be tested. I only hope I can stay strong for You.

In preparation, I’ve decided not to eat any solid foods for the next few weeks, as I’ll likely throw up the first day I see him in that burgundy and gold uniform.