I reverted back into “Sarcastic Ref Dustin” last night for a minute. I started out in this profession of intramural official as 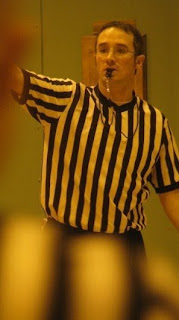 rather timid and afraid of the pace of the game, like most people do. I then became Sarcastic Ref Dustin and whenever somebody would question a call and I knew them to be wrong, I would – very subtly – make them look like an ignorant ass in public. “But the ground caused the incompletion” one player would say. “I know” I would retort. It was a dance a man with a superior intellect, a position of power and an obviously more comprehensive knowledge of the rules of the game being played would win every time. And yes, you can win dances.

After years of these idiotic comments born from very obviously biased sources, one of two things happened. Either I became more professional in my approach or more desensitized to idiocy. I did not talk back to teams nearly as much as an official. Or at least I was able to holster the degrading retort to an idiotic comment. I’ve always been able to joke around with the greater majority of teams and players who get the core concept of a recreational game. Well, a team last night finally got on my nerves to the point where I no longer felt the need to play nice. Sorry guys, but you’ve done enough.

After a whole game filled with eye rolls, looks of disbelief and staredowns (of the officials), I had had enough. One of the players on the opposing team had bounced the ball a little too high and let it go between bounces. This is a completely legal play in every version of basketball. The other team was complaining that he (and I quote) “let it go and then touched it again” (end quote). That was seriously their entire argument. I don’t know how to refute that. I got a look on my face of disbelief. Confused, I said something to the effect of “huh?” Again, they said the same thing and now two players on their team were complaining. And the comedian in me saw an opportunity to get revenge against the hecklers. “He let the ball go and then touched it again? That’s called dribbling.” I may have thrown in a “I don’t understand what you’re asking” or “It’s not a travel” to give myself plausible deniability like many of them do over and over, but it was a smart ass remark and hit its target demographic. I don’t regret it, but I’m not proud of it. After all that team had put me through all year, I feel like one jab back to prove I can jab back but I just don’t is sufficient enough. After all, I did hear one NCAA official tell Coach Phil, our UMBC women’s head basketball coach “I didn’t call it, so obviously it was not a foul.” And if he can say that, I can inform people what dribbling is.