The Weight is the Hardest Part

I found a huge hole in the things that I’m good at in this world. Last week, we sponsored a weight lifting competitio 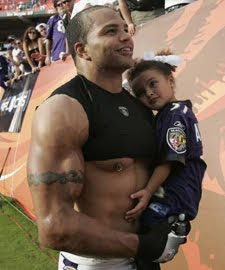 n at UB with guest judge, Brendon Ayanbadejo from the Ravens (and the UB Business School). Now I know that I’m not a strong guy by any standard, certainly not by NFL linebacker standards, but I figured I could at least hold my own. Curious of exactly where I’d fall in the scope of this contest in which you had to lift 80% of your body weight as many reps as you could, I laid down on the bench and proceeded to not be able to get the bar off my chest, proving that I could literally not hold my own. Not even 80% of my own. I would be a horribel ant. And I did this not in the gym, but out on Gordon Plaza with a huge crowd for everyone to see.

I lost a lot of street cred.

Not only could I not lift this thing, but I also think I hurt my shoulder trying. And not just my shoulder, but my left testicle felt a good amount of discomfort when I sat down to pee that day. But that could be because it was caught between the seat and the bowl. Nevertheless, I was embarrassed. But even more than that, I was pissed. Really? I’m that inept now? I played high school football once upon a time. Sure, my nickname was Speed Bump and I led the team in hanging on to running backs until one of the linebackers could catch up to us to bring him down, but I still played football.

This cannot happen again. So the answer is obvious. It looks like I’m going to have to lose a lot of weight before the next challenge so I won’t have to lift as much. I suppose I could try to get stronger, but that seems like a lot more work. OR… I could just decide not to care. This actually seems like the path of least resistance. When faced with the decision to do 20 push ups during the commercial breaks of Parenthood or get a bowl of ice cream, we’ll see how much I really care about lifting a 135 lb. bar off my chest.