What If?: The Orlando Brown Case

Policy changes in the NFL because of an incident is not unprecedented. In 1999, Cleveland offensive lineman Orl 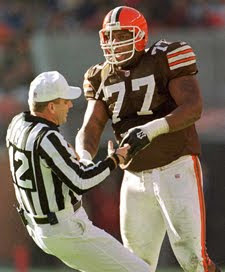 ando Brown was blinded in one eye when struck with a penalty flag weighted with metal pellets. This act unfortunately did not negate the 10-yard holding penalty for which the flag was originally thrown. Nor the 15-yard penalty and $130,000 fine for striking the official who through the flag. The following year, the league got rid of the metal pellets and went to goose feathers. Unfortunately, this caused an unprecedented reaction. Literally. A similar incident happened in Seattle when Jackson White was hit in the eye with one of the new goose feather flags. Jackson had an allergy to down and suffered an eye infection. He took a page out of Orlando’s book and punched an official. But this was two months later.

“What are you doing?!” his wife shouted.

“I’m getting this bastard back!” he replied.

“But this isn’t the same guy!” she pleaded.

“Sure it is!” he countered, squinting out of his good eye.

“But we’re at a basketball game!” she cried.

(Part of this story may have been exaggerated or fabricated completely)