Last night was a pretty average night that ended in a Tony Reali sighting. I’m not the kind of guy that gets 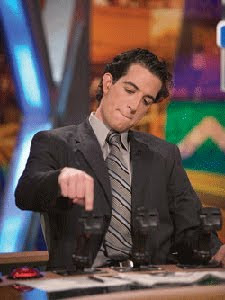 starstruck, or at least I’m not the kind of guy who admits to getting starstruck, but I don’t even know how to act around hot bartenders and still get strangely intimidated by high school athletes at age 35, let alone real live famous people. I don’t necessarily feel that I’m inferior to these celebrities, or at least I don’t admit to it, but I just don’t know how to act around these celeb folk.

We sponsored a weight lifting competition a few weeks back with guest judge Brenden Ayanbadejo and I didn’t know how to act around him either. My goal was not to treat him like he was any different than anyone else in order to make him feel more welcome. So I treated him like I’d have treated anyone else and pretty much didn’t talk to him at all. But in this case, I was aware of it. Which makes it ignoring rather than indifference. So I’m apparently a dick to celebrities. But at least just a passive, flaccid dick. Not a… well, you get the point.

So last night, it all happened kind of fast. I was downstairs in this bar after the Speakeasy show with apparently a bunch of guys and girls who don’t watch nearly as much sports television as I do, which is pretty much going to always be the case unless Kevin, Russ or a professional sports writer is there. I saw him and he actually said something to somebody either in our group or to our waitress, who was part of our group by now. My brain searched the database of faces and voices and put it all together about 4 seconds after transmission who it was. He was already gone and up the stairs by the time I knew who he was and honestly, that’s probably the best scenario because I still haven’t thought of anything witty to say and I’ve had a night to sleep on it.

Tony apparently goes in there a lot and the waitress, seeing the vague look of recognition in my face as he walked by and disappeared up the stairs, tried to curb my enthusiasm as to not chase away any of his future business. The interaction went like this. “[confused look on my face]” “Shh.” “Hey –” “Shhhh.” “But… who –” “SHHHHH!” “That was Tony Reali!” “OK. Chill.” “I follow him on twitter. I FOLLOW YOU ON TWITTER.” I said this loud enough so that I doubt he really heard me but there was a small possibility that he did. So in 3 weeks, I’ve graduated from passive dick to passive aggressive dick. I’ll refrain from using a euphemism for that.