Ben Kingsly has played the vice-president, a concentration camp sympathizer and Mahatma Gandhi. He has an Oscar and a couple Golden Globes. And this may be his best work yet. 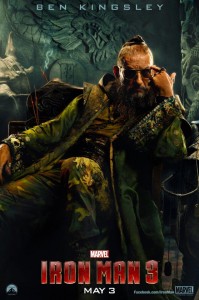 This man was the best part of this movie.

I heard good things about this movie. It is the most recent franchise to turn its fun-loving playboy hero into a dark, flawed man, tormented by his own demons (Skyfall and Nolan’s Batman come to mind). Cool. Downey is fun to watch regardless, but I looked forward to a little depth of character to keep Tony Stark from disappearing down that hole that Jack Sparrow got swallowed in. And it worked.

And only for two thirds of the movie.

His anxiety over what he simply called “New York” manifested in panic attacks in the middle of the movie. His version of the world in which he stood on top of the mountain alone, separated from the rest of the plebian world by oceans was rocked by the introduction of aliens and gods and wormholes. Kinda like the big fish that gets caught and taken into a boat, only to be thrown back in. I imagine that fish would also suffer from a little anxiety.

The scenes in the middle with the kid – however contrived and formulaic – were fun to watch. It almost made me forget how ridiculous the plot was to get him to rural Tennessee in the midst of all these Mandarin attacks.

When you like a movie, and sometimes when you just want to like a movie, you can forgive it some plot holes. Maybe the 1985 Marti McFly went back to shouldn’t have been that alternate 1985. And maybe Leonard Shelby shouldn’t be able to remember he has a condition. But I can forgive the movie its small plot holes because of my love for it. Like my wife, which is topic for a different day.

Then came the scene that pushed the movie past the point in which I was able to overlook all these plot holes and contrivances.

Air Force One was damaged and 11 people fell from the plane. In heroic fashion, Tony went after them. Despite that he was told by his omniscient body armor that he could only carry four, he carried all eleven and when he set them down safely in the water, there was a cutaway of all of them cheering him with fists pumping and ridiculous toothpaste commercial smiles on their faces.

This movie has no guts. Damn. Hey! Look at all these holes I just noticed!

It was a mess, culminated in the 45-minute mandatory action sequence to close the movie. And yes, I realize I’m complaining about an over-the-top saction sequence in a comic book movie. I started to look at my watch. When was this silly battle going to be over? I know how it’s going to end. And in this “spectacular” ending, the suits fight the bad guys without the restrictions of having people inside them. Why doesn’t he do this all the time? Whatever. It was a comic book movie. I was just hoping for more. I guess Joss Whedon can’t make every movie.

Still, for Downey’s sharp wit and Kingsly’s incredibly satisfying performances alone, it’s worth watching. But feel free to make dinner or sort the laundry during the last 45 minutes. You should already know how it’s going to end. Unless you see it in the theater. In which case, you probably shouldn’t have even brought your laundry to begin with. 6 bugs (out of 10)