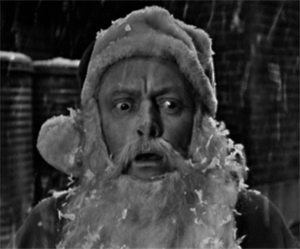 In addition to writing twelve (at least five) blog posts in the days leading up to Christmas (anytime from somewhere in mid-December to July 4th), I have one other holiday tradition. I watch Night of the Meek, a 2nd season Twilight Zone episode starring Art Carney as a drunken department store Santa.

But really, it’s about magic.

First of all, there is not another theme song as awesome in any way ever. Nor will there ever be. This is not a discussion. Agreed? Good. Moving on.

The first thing you’ll notice is that it’s shot in video. Black and white video, which looks like a gas station surveillance cam. Apparently, the iconic Twilight Zone was losing money and needed to cut back the budget for a few episodes. Who knew? If you can stomach the first thirty seconds, you can probably at least tolerate it for the next 22 minutes.

The story opens on Christmas Eve in a department store missing their Santa because he’s at the bar drinking away the problems of the have nots. The meek, if you will. All he wants is for them to have their night. But you knew that from the title. After being fired for drunken insubordination, he finds himself sitting next to a bag of trash that suddenly turns into a bag of presents. As he gives them out to the elderly at a local church, he gets arrested for having stolen the merchandise. Only the bag turns back into trash at the police station.

But once arraigned, it starts giving out gifts again, this time to kids on the street, until all the gifts and children are gone. And he has his magical night for the meek.

But that isn’t where the magic stops. And that’s why I like this episode. It takes a practical – nay, cynical – tone and makes you believe that there might be magic someday. Maybe there isn’t now, but there might be. And yes, I’m happy to admit that though I don’t believe in magic, it’s fun to live in a world where I could change my mind.

If you haven’t seen this, do yourself the favor. You can stream it on Netflix if you do that. Or you can borrow the DVD from me. Or look for it on one of those illegal Norwegian sites. But check it out if you can. It’s worth your 23 minutes.

Or you can tell me how wrong I am, which is equally worth 23 minutes of your time.