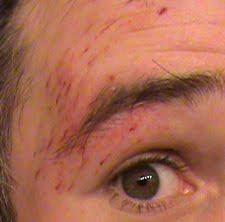 recommended that I go to the ER to get scanned or probed or to basically do whatever they told me to do. Unfortunately they told me to wait. Apparently, I had passed the “wait in line without collapsing” test, so they put me at the back of the line. Jenn and I had to sit in the waiting room for hours, under some false impression that I shouldn’t go to sleep. Apparently, that’s not really a concussion thing. I understand why it shouldn’t be in the middle of a football field in 20 degree weather using a football as a pillow, but regular sleep in an ER waiting room chair would have probably been OK. Still no word whether or not we were on offense or defense.

About three hours after arrival, we were escorted to a room designed strictly to make us feel like we were closer to being helped. It still took another half hour for anyone to come in to say hi. Two nurses came in and took blankets from our closet before anyone came in to see me. They used to tease me with sex, now they tease me with head trauma treatment and the promise of getting home before Taco Bell closes. The doc finally came in and started asking some questions. No, I don’t remember that. Yes, I can see fine now. Yes, my head hurts, but after three hours in the waiting room, so does Jenn’s. He thought it best to get a Cat Scan of my brain. I figured since we’d been here for so long, I might ask him about my rotator cuff, which I think I re-tore or my thumb, but then I thought better of it. I had chicken baja chalupa on the brain.

He warned me of the perils of radiation and then sent me on my way. Well, I had to wait another half hour – I’m assuming just because they’ve established a pattern – but then I went into the cage. I thought about just sticking my thumb in there to see if it was broken, but the wheelchair nurse didn’t think it was a good idea. Then she licked some whipped cream off the side of her mouth. Damn them!

I called my doctor today and the scheduling office told me I’d have to wait until “mid to late February” for an appointment.

“It doesn’t matter. That’s the first appointment available for her. All the other doctors in here are booked until March too.”

“I just had a concussion and lost consciousness for 90 seconds and have about 15 minutes of my life I still can’t remember and spent 5 hours in the ER this weekend getting my brain looked at. You think you could check again?!”

So I have my follow-up appointment Wednesday. While I’m there, I’m just going to go through the laundry list of shit I need fixed. I’m getting a referral for my shoulder, having her check out my thumb, I’m going to revisit the whole pus coming out of my old Achilles scar-thing and I may even see about that green fluid that seems to be leaking from my car. But if I’m not getting back in until March, I’m getting my $20 worth, that’s for sure.

(check back tomorrow for the exciting conclusion! or maybe just some more BS)