My first interception in three seasons and I don’t remember it. 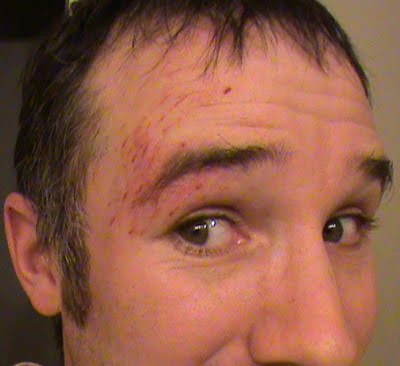 For those that watch the NFL, you already know that this year has been the year of the concussion. I decided to get into the action in my flag football league. I jumped up to make an interception and after contact, I fell to the ground with the ball cradled under my chest, which see-sawed my head into the ground.

This is all hearsay for the record, as I don’t remember any of this. Nor do I remember the 90 seconds of unconsciousness, using the football as a pillow, denying the request to bring an ambulance when somebody had them on the phone, getting helped to the bench or unsuccessfully trying to remember what day it was. After being asked the question, I just stared off into space. All I kept asking is “Are we on offense or defense?” Dude, you just intercepted the ball! “Great! Are we on offense or defense?” People who don’t even really know football know that when you intercept the ball, you’re on offense next. So if the 90 seconds of unconsciousness or the inability to remember the day of the week wasn’t enough, this made everybody realize that things weren’t quite right in my head. Literally.

Lost in that comment is how awesome of a feat this was. How many people do you know of who get concussed and lose consciousness for over a minute and still make the catch? My body may be frail and injury-prone, but NEVER question my dedication to the sport, even in the face of severe head trauma.

When I came to, (the part that I remember), everyone told me that I gave them a big scare. Sorry. Ironically, I wasn’t afraid at all, as I don’t remember a damn thing. I remember becoming aware of my surroundings, which was about 10-20 minutes after everyone else thought I woke up. Strangely (or maybe not), my memory also starts exactly then. I was again asked what day it was. I had it narrowed down to 2 days, as I doubted I’d be ditching work with everybody else to play a football scrimmage. Then I remembered I wasn’t watching football and figured it out. Score some points for my deductive reasoning, but I don’t think that’s the process by which concussion patients are hoped to come up with that answer. I think most people just kinda know what day it is. All I really wanted to know was whether or not we were on offense or defense. For some reason, everybody laughed.

(stay tuned for my trip to the hospital tomorrow)