Inside the Head of a Performer IV: The Remount – Part 1
Logic, Luck and Love

I’ve apparently written over 7,000 words on the first five-day run of Logic, Luck and Love last summer. Don’t worry. I no longer have that kind of time on my hands. 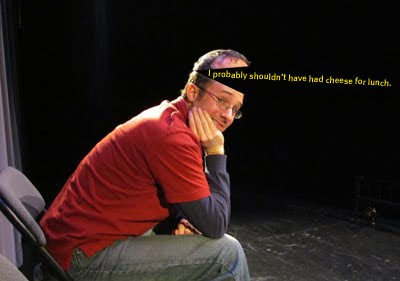 Sold out show. Atlas Theater. 250+ people in the stands at $22 each. I’d seen this large a crowd before at the Funny Bone in Cincinnati. But those people were there to see Adam Ferrara or Steve Trevino. I just had to tell five minutes of dick jokes and hand off the microphone to the people that the crowd really came to see. This time, I was Adam Ferrara. Or at least one of four Adam Ferraras.

So yeah, I was nervous. I was fine – actually feeling good – until the day before when I got a text message from Jenn (performer) saying she was just starting to get nervous. That text was a virtual computer virus because I caught her nerves just from opening the message. But it didn’t really hit me until the day of.

Half an hour to show time. That’s really when it hit me. Kevin was trying on shirts and talking to Molly about something unrelated to the sheer terror of performance storytelling. I couldn’t listen anymore. I went to the other section of the green room to reinforce my rib cage so my heart would be less likely to burst completely out and onto the ground. Unfortunately the three beer rule doesn’t apply to theater. Not when I have other people counting on me. I don’t know why not, really. Seems sort of idealistic for no fucking reason now.

It was time. Ten minutes to curtain (a business term I’ve since picked up). Time to go upstairs and pace around backstage and try not to piss or shit myself. I can’t specifically say that I’ve never been this nervous, considering this is an immeasurable variable and knowing the fallibility of human memory, but I had started chewing Kevin’s fingernails.

I peeked out from behind the curtain at the growing crowd. There are several parts of my opening monologue where I need to call out people in the audience and connect with them through eye contact so I could project my desires onto them. They don’t need to be too specific, but I need one to not be obese (“no fatties”) and another to be female (“the willingness to perform certain… sexual… acts”) – preferably hot – and I’d like to know before I walk out there where I can look to find these people. After the rehearsal, I wasn’t sure how far I’d be able to see into the crowd. It got pretty dark out there and since I was first up, my eyes would have no time to adjust.

ANYWAY, I peeked from behind the curtain, something Kevin does often, but the two ladies see as unprofessional. And then I saw the middle section third row. From right to left (how I saw them) was Ashley (my cousin’s girlfriend), Johnnie (cousin), Uncle John, Aunt Joyce, Jenn (fiancée), Meatwad, and his date (or so I assumed and was wrong). I owned that middle section third row. And something honestly unprecedented happened.

I had a sense of calm. I got this. This show is going to be awesome. And easy. I had been walloping my lines into my gray matter all week long and I felt a confidence I hadn’t ever felt before. In anything. I probably never had any material that I had rehearsed even a tenth as much as this stuff. And as opposed to last summer, I wasn’t just done writing it the week before. I stopped the constant rehearsing of the opening act I’d been doing in my head for the last 25 minutes. I knew I’d be fine out there. Not only that, but I knew I’d be able to be in the moment out there, talking to the crowd. Not thinking about the next line as I’m saying this one. Thus making it more real. I felt a cocky. Which happened to be good for my character. This was better than OK.

Amy came up, said some stuff, introduced us, and I was ready to go. The music started. Quietly. Too quietly. Something was wrong. We were on opposite ends of the stage. Both sides missed the cue but thankfully we came out at the same time. And when we walked on stage, there was a wave of applause. That had never happened before. This was going to be easy.

(to be continued tomorrow (hopefully))

2 thoughts on “Inside the Head of a Performer IV: The Remount – Part 1”