So I’m assuming a lot of you probably got here from the UB online marketing blitz for the Aries Spears show. Which means I probably work with you or for you or against you on some level. This is a concern. 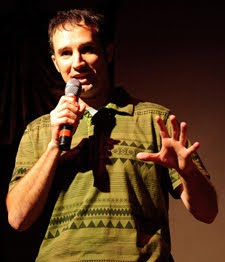 was a little (a lot) hesitant to publicly divulge this web address on any UB-related material because though most people know I “do stand-up,” most people don’t really know what that means. Four years ago, I didn’t either. But the UB marketing powers that be thought I would look more professional if I had my own website to promote, which I do. So I figured “well, here goes nothing.”

All comics across the country have day jobs, save for maybe 200 people that can sustain a living somehow. And all those people live in New York or L.A. So we all have to at some point make a decision about whether or not to disclose this information to our day job colleagues and how much of it we can afford to reveal. This is based on three factors: 1) the comedy material one may find, 2) the job one has and 3) the likelihood anyone who you don’t want to see it will see it. For example, people who get up and do holocaust and woman-bashing material should probably just not do more than tell people a casual “Yeah, I do stand-up on occasion.” No websites, no pamphlets, don’t ever let your colleagues know where you’re performing. Secondly, if you are a high school teacher, it’s probably best to hide that stand-up info from people. My buddy has a fake name and two facebook pages and I get confused, but I understand. Third, though the information is out there, sometimes you just kind of assume that certain 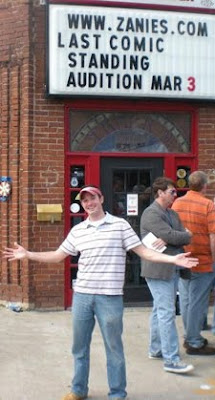 people won’t find themselves to your website. If wrong however, that could get you into lots of trouble. These same rules apply to mothers, ex-girlfriends, and some intelligent pets.

And so, here I am. Exposing my other life to my work life. I’m sure others before me have involved their personal life in their work life. I just ask that you take it with the understanding that it’s stand-up comedy. And it’s not like what you think it is. There is cursing. There are sex jokes. This is necessary to get started in the business, trust me. I don’t have time to explain it all now, but on a scale of local performing stand-up comedians, I’m among the cleanest. Maybe I’ll have time to explain that all soon enough. But for now, I only ask that you turn on your sense of humor and tolerance and give me the benefit of the doubt. Even Seinfeld tells dick jokes in clubs. And what’s good enough for Seinfeld is good enough for me.

In the meantime, check out some of my videos on the right side of this site. You’ll notice a sharp contrast in styles between me and Aries Spears, which is probably not good, but will make for a very interesting night.