Inside the Head of a Performer V: The Warm-Up – Part 1
Fan-Freakin-Tastic

Due to an overestimation of either how easy it is to do stand-up comedy or how funny I am, I landed a gig opening for 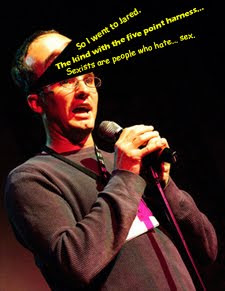 Aries Spears at the Lyric in front of potentially 1,500 people. Because when you think of who should set up the crowd for some physical low-brow African-American humor, I am the obvious choice.

Anyway, the University’s Student Events Board asked me to open for Aries Spears on May 13th. They asked me to do “10 to 20 minutes,” probably not realizing the vast canyon separating those two units of measurement when it comes to stand-up comedy. We’ve since settled on 15 minutes, but unaffected by the time I will be on stage is the crowd I will be performing in front of. How the hell am I going to appeal to a bunch of his fans? My typical “Hey, have you thought about this?” and “How about this play on words?” is dangerous for that amount of time when the crowd expects to see a dumbed down Shaq impression.

Thankfully, when I told Vijai about the show, she jumped on the chance to help me out and found me a spot in her monthly comedy show, Fan-Freakin-Tastic. I really wanted to practice the only real physical bit that I feel comfortable with, which is the Douchebag Dance. It’s a story that is about 5-8 minutes long that I use in Logic, Luck and Love, but I’ve never tried in front of a stand-up crowd. Unfortunately for me, this crowd is already predisposed to a storytelling style of comedy, which makes them a much more forgiving and patient audience. This is normally a great thing, but not if you want some very specific and honest feedback. Oh well. You gotta play the hand that’s dealt.

First of all, I haven’t performed anywhere since our Valentine’s Day remount of Logic, Luck and Love. And that night was kind of a coming out party for me as a professional. As nervous a wreck as I ever was, about 5 minutes before showtime, a peaceful serenity came over me and I just felt like “I got this.” I never had a confidence like that on stage and I had never had a bigger show. It was almost like I was a professional.

So this night at Chief Ike’s was very similar. I felt a little nervous twice: after my first practice run-through, which I didn’t do until an hour before I was going to leave to get to the show when I realized I didn’t have this stuff memorized like I thought I did yet, and again just as I was getting up onto the stage in fear that I may have accidentally gotten myself too drunk. I stuck to the three beer rule, but it had been a while since implementation so I may have lost some of my tolerance. Plus, I drank four beers.

2 thoughts on “Inside the Head of a Performer V: The Warm-Up – Part 1”