Happy Father’s Day to all the fathers out there! I just finished watching Big Fish and bawling my eyes out, which has been a Father’s Day routine of mine since he passed back in 2005. And since way back in 2010 (not a misprint), I’ve been running a Father’s Week tradition on this website where I’ll post a different story about my father every day of the week directly after Father’s Day. Or at least when I get around to it, hopefully sometime soon. Fred Frey told me shortly after my dad’s passing that the Native Americans believe in two deaths: the death of the body – which I’m assuming you can all figure out on your own, and the death of the soul – which occurs when the last story about a person is told. So as long as people keep telling stories about a person, that person’s soul will live on. According to Indians. Which I don’t think really exist anymore. Except for those that run casinos. Which happens to be something my father could get behind anyway. So I’m rolling with it for another year. It gives me a good reason to pour some energy into thinking about my father and into writing.

Since Father’s Day 2010, I have inherited another two fathers. My mom married a man named Dennis last November. He certainly treats her well and loves her and she loves him back. But as I am 36 years old and (somewhat) independent, I don’t really call him my dad. And I think that’s a pretty well understood dynamic. Again, he’s a great guy and I suppose technically a step-father, but I’m old enough to be a father (really, a grandfather at this point), so he will remain Dennis.

The other man, however, is the father of my lovely new bride, Tom Morrison. He was not fortunate enough to have a son and though he lives in Texas, somehow doesn’t like football, but he is a man I’m happy to call my dad. Which is something I can’t necessarily say for Jenn (zing!). See, I can kid since we’re family and all. Anyway, Happy Father’s Day, Daddy Morrison. 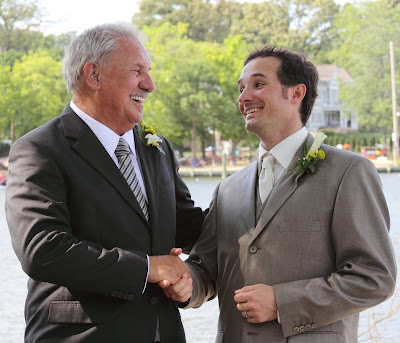 But everyone knows my father was one of a kind and I am sorry for everyone who didn’t have the fortune to meet him. When asked who my comedic inspirations are, I list him as #1 and Paul Reiser as #2. So you should enjoy the next couple posts. Check out last year’s stories in the upper right of the page or below and be sure to check back in the next few days for some more Dustin’s Dad stories.