While some folks were getting their college degrees and finding a niche in the workforce, dad was hustling pool and poker to 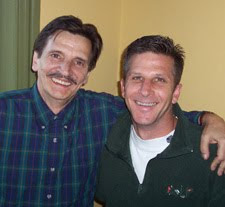 get his money, and not always honestly. When I came back from a two-week vacation in Myrtle Beach in 2004, I told him that it was the first time since I graduated college in 1998 that I had 2 weeks in a row without work. He retorted “Wow, Dus. I don’t think I worked for two weeks straight since 1998.” Thanks. Rub it in, pop.

My dad admittedly grew up on the other side of the tracks. He told me once reluctantly about a time when he fixed a deck to get some money from people he barely knew. After the cut, he sneezed with one hand and stuck the other hand into his lap to switch the decks in a classic misdirection move. He said it was dangerous and he was really hard up for some money at the time and didn’t speak of it with any pride. I’ve done this many a time in strip poker with varying success. When people are drunk and naked and insecure, nobody really watches the dealer. A little tip for you newbies out there.

But then there was one time that he was happy to tell me about a cheat he pulled. This time there were multiple people in on it and though it was in a game for money, that wasn’t really the point. It wasn’t about the money. It was about the funny.

He was at a buddy’s place playing poker with five other people, including his brother Mark. He and Frankie stacked a deck and planned to get this one guy they wanted to mess with to stay in and throw all his money in on a losing hand. My dad walks in the kitchen, which was just behind Frankie’s chair but off to the side. Just as Frankie says “CUT” and hands the cards over to whoever was cutting, my dad asks where the paper towels are. Frankie takes the deck in his hand and uses that hand to point in the direction of the kitchen. His hand is behind the kitchen door and out of sight for just a moment while he points and that’s when my dad takes his deck and replaces it with this elaborately planned ruse.

What was supposed to happen is that Frankie and this other guy were supposed to be in the hand, with the other guy being the aggressor and Frankie calling and eventually catching a straight flush to beat out this guy’s full house. The two of them followed the script for the most part with one exception. My Uncle Mark was trying to bluff them out. He had been dealt 3-5 and decided to protect his little blind, despite a hefty raise from someone with pocket Ks.

The flop comes up 10-7-K, giving the target of this elaborate scam top trips on the flop. Mark now has K-10-7-5-3 with no chance for a flush. He decides to bluff. Trip Ks raises him and Frankie smooth calls with a straight flush draw and the knowledge that he will get that straight flush draw, thus making it basically a straight flush already.

Mark gets pissed off at the raise and calls. My dad shakes his head and, knowing what Mark has, shoots him a look. I don’t know quite what a look of “Get the hell out of this hand; we’re fucking with this guy over here!” looks like. Apparently neither did Mark.

A 7 hits on the turn. The target now has a full house, as was carefully planned; Frankie has not gotten closer at all, but still has one card (his card) coming; and Mark has the same pair of 7s everyone else has and two cards that probably won’t play. And Mark comes out firing. This betting sequence is no longer coming from a place of strategy, but a place of anger and arrogance. Full House raises and Frankie once again calls. Mark re-raises and offers to show his penis. Again, my dad shoots the same look, but as intense as he feels he can give it without arousing suspicion. Frankie now shoots him the same look. Defensively, Mark shoots a look back that says “I GOT A FUCKING HAND, OK!” Full House and Frankie call.

Frankie’s card hits on the river, the 6 that will complete the 6-7-8-9-10 straight flush. Mr Full House has a hand that could only be beat by the 8-9 of spades OR the remaining two 7s, making it a 2 in 1,980 chance that he’ll lose. Mark’s hand can be beaten or tied by literally every possible hand. His hole cards don’t even play. This is an embarrassment. Finally, he checks to the relief of my father. Full House goes all in and Frankie calls. “This is bullshit!” exclaims Mark and throws his hand into the muck. The target shows his cards and Frankie shows one of the two hands in 1980 that beat Full House. Frankie and my dad start to laugh. Full House stands up and yells out “You fuckers set me up!” But jokingly. Five people erupt in laughter after watching this whole display. There are six people there.

“What didja have?” asked my dad, coy as a fish.

After he was gone and the money was returned to everyone but Mark – who now had store credit – Full House asked my dad what they gave him.