Double Feature Duel:
Escape from the Planet of the Apes vs. Transformers 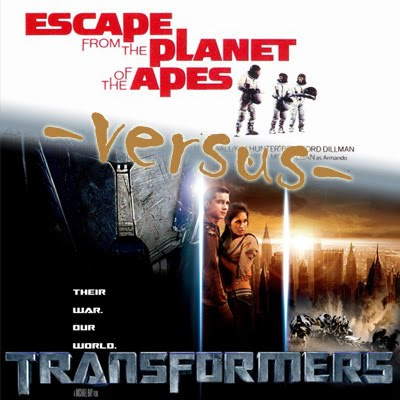 Bout #14: Despite the abysmal second film in the POTA series, I decided to keep going, since it couldn’t possibly get worse, right? And then to get that taste out of my mouth, I decided to watch a mindless Blockbuster when I likely just couldn’t get off the couch.

Escape from the Planet of the Apes: Well the good news (and also the statistically unsurprisingly news) is that this movie was better than the last. It stripped down the cast of hundreds of ape heads to just the two main characters who improbably travel back in time to more or less the exact year that Heston left in the original. Why the hell not? My disbelief is already suspended. But it still has that early 70s pacing and effects that apparently weren’t seen as ridiculous back then. 5.5 bugs.

Transformers: Maybe I’m a visionary or just stupid, but why not take all the awesome special effects that you have promised the greater public and get somebody to write a real script for it? This movie couldn’t figure out if it was Die Hard, Small Soldiers or Evolution. Are you taking yourself seriously or not? But now I know what that whole Megan Fox craze is about. 3 bugs.

Title: So many movies just say what the movie is about now. It’s minimalist and lazy, but at least you can read it while driving by the marquee without getting in an accident. (Point, Transformers 0-1)

Funnier: Escape to the POTA seemed to have some fun now that it’s decided it doesn’t need to be the vessel to end all nuclear wars. “Does the male one speak too?” [Pause] “Only when she lets me.” Well done, 1971. I didn’t see that coming. (Point, Escape 1-1)

Better Turn: I’m not a big fan of truth serums. Funny enough, I don’t believe them. But I’m also not a big fan of whatever Transformers was trying to do with the glasses and the cube and what the hell are these Autobots and Decepticons doing on earth anyway? (Point, Escape 2-1)

Better Ending: The good guys win and the Decepticons – or whoever the bad robots are – are destroyed AND the guy gets the girl and the cool car >OR< The two time-traveling apes pull off a baby switcheroo just before they’re killed trying to ensure the apes have a chance in their battle AND another sequel or two. Well, despite the whole baby-stealing aspect of what the two apes did, I do enjoy the sacrifice for the betterment of their race. And the future sequels. (Point, Escape 3-1)

Better Message: Rather than rehash the nuclear war moral so very prominent in the series and that time in history, Escape to the POTA attacks xenophobia like it’s the south Texas border while slipping in some ahead-of-their-time stuff about the pollution and overpopulation problems. And Transformers didn’t bother competing in this category. (Point, Escape 4-1)

More Creative: Maybe it’s because I grew up with them, but I have to admit that I enjoy the concept of the machines that turn into creatures with human-type features. Not that time traveling apes are all that common. (Point, Transformers 4-2)

Poster: If I’m hanging one on my wall, it’s gonna be the Transformers poster. OK, it’s gonna be a poster of Megan Fox in a bikini, maybe some lingerie if I can find it. But for this point, I’m going with the faux-old school family portrait of the apes with baby. They’ve learned to let their hair down a little. (Point, Escape 5-2)

Better Acting: Transformers made good actors – notably John Turturro and Jon Voight – look lost. And Roddy McDowell seems to have found a little niche for himself as a very believable ape-human. I guess. (Point, Escape 6-2)

Watch again: Unlikely will I ever watch either again, but if forced at gunpoint, I’d probably watch Escape from POTA. It’s like an hour shorter. (Point, Escape 7-2)

Overall: About what I thought. A battle between two movies I hope to never see again can’t bode well for this bracket’s success in the next round. Winner: Escape from the Planet of the Apes (7-2) 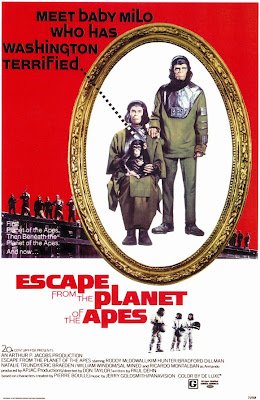